4 injured in explosion at Army Depot - The Horn News 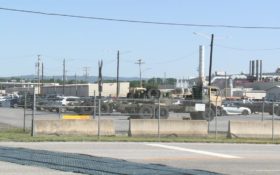 A small explosion Thursday in a vehicle shop at an Army depot injured four workers, leaving at least three with burns, officials said.

The blast occurred at Letterkenny Army Depot about 7:15 a.m. Army Depot officials quickly posted on social media that the blast was contained, that operations elsewhere on the base would not be affected and that there was no suspicion of terrorist activity.

Col. Stephen Ledbetter, the depot commander, said three victims were flown to Baltimore area hospitals and the fourth left in an ambulance.

A fire company said three had burns. Their conditions were not immediately available.

Ledbetter said the explosion occurred in the painting area of a vehicle shop.

Both the Army and the Occupational Safety and Health Administration will investigate, he said.