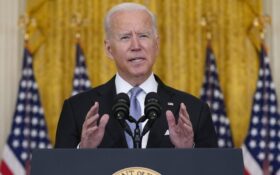 Experts are sounding the alarm that President Joe Biden could be leading the nation into an economic recession.

“Three main issues likely will plunge the country into economic backsliding and spark stagflation by the end of 2022: inflation, supply chain issues, and an unraveling labor market,” libertarian writer Kristin Tate warned in an opinion piece on The Hill.

She said inflation is now costing the average U.S. household an extra $2,000 a year – and predicted it will get worse if Biden and the Democrats raise taxes.

“The proposed Biden tax hikes intend to target the wealthy, but the average family will foot the true cost of the bill through higher rent and mortgage prices, higher health insurance premiums, and higher college tuition,” she predicted.

The warnings aren’t just coming from those on the right.

Even CNN — normally friendly territory for Biden — called him out over his economic missteps.

Host Erin Burnett slammed Biden and his team for being “caught flat-footed on the economy” with a “broken supply chain” including ships waiting at sea because they can’t dock and unload their goods.

That’s led to the twin nightmares of empty shelves and rising prices as the nation gears up for the holiday shopping season.

“Why isn’t Biden doing more? And I guess the more appropriate question here is actually why didn’t he do something much sooner?” she asked. “Because this problem didn’t just suddenly knock on the door. I mean, it was coming.”

She pointed out that inflation has jumped to a 30-year high, including gas prices up 52 percent, the prices of eggs rising by 36 percent and the cost of bacon jumping by 28 percent.

“There go any wage increases,” she said. “Right out the door.”

For the reasons Burnett spelled out, consumer confidence has plunged, hitting a seven-month low overall – and the numbers on the ground are even uglier in some cases.

A survey in New York conducted by Siena College, for example, found consumer sentiment in that state plunged 12 points since the second quarter of the year.

“These are the worst results in memory, and we’ve been doing this since 1995,” Doug Lonnstrom, founding director of Siena’s Research Institute, told NPR station WXXI.

“One, there’s a report out that says Christmas is going to cost about 30 percent more this year, and second, you may not even be able to get anything because of the supply chain,” he said. “We’ve got like 60 boats sitting out on the Pacific, not able to come into port.”

Biden this week announced a plan for key ports to operate 24 hours a day, 7 days a week to help ease the backlog.

But some observers say the issues are hiding a much deeper and much more fundamental problem.

“All year long this year the Fed continues to run an emergency policy when the emergency has long passed,” he wrote for Fox News. “They keep buying bonds, expanding their balance sheet, pumping money into a banking system that does not want the extra cash.”

That’s essentially free money, he said, and it’s having a major impact on stocks and other assets – and it’s leading to inflation.

“That is not good,” he wrote. “It’s a 1970s type mistake, including monetizing the rising oil price.”

Those rising prices could haunt Biden and his party this time next year as voters head to the polls in the midterm elections, which will determine control of Congress – and the fate of his agenda.