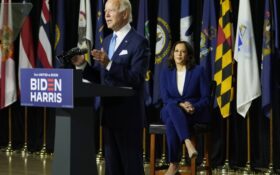 President Joe Biden has long described himself as a “gaffe machine,” but lately the gaffes have become so frequent as to become downright shocking.

Some have moved beyond damage control, and at least one person is talking about the unthinkable: Removing Biden with the 25th Amendment.

Biden made headlines Tuesday with three gaffes at an event in Florida.

“Inflation is a worldwide problem right now because of a war in Iraq and the impact on oil and what Russia’s doing,” Biden, who turns 80 later this month, said in a speech.

“Excuse me. The war in Ukraine! I’m thinking of Iraq because that’s where my son died.”

Biden mixed up the Iraq War and the Russia-Ukraine War. Then, he described his son as having died in Iraq.

Biden’s son Beau died from brain cancer years after returning from the war.

Former President George W. Bush mixed up the Iraq War and the Russia-Ukraine War earlier this year, but he didn’t misstate a family member’s cause of death. Bush, now 76, is almost four years younger… and he took office at a significantly younger age.

Biden made at least two other gaffes in the same speech. He accidentally referred to a House Democrat as a “friend in the United States Senate,” and he made an unsupported claim about speaking to the inventor of insulin (The substance wasn’t invented; it was discovered.)

Biden: "Inflation is a worldwide problem right now because of a war in Iraq… Excuse me the war in Ukraine. I'm thinking of Iraq because that's where my son died." pic.twitter.com/rdAuk5jOiN

"I don't have a greater friend in the United States Senate." pic.twitter.com/1B6Rg1tVSi

Joe Biden claims that he spoke to the man who invented insulin. pic.twitter.com/FLjIZ1jPdE

Biden has worried some observers with these gaffes.

In fact, Merrill Matthews on The Hill‘s opinion page floated the idea of forcibly — but peacefully — removing Biden.

If a majority of Cabinet officials give congressional leaders their written notice of the president’s incapacitation, then they can remove the president under Section 4 of the 25th Amendment.

In uncharacteristically plain language, Section 4 says, “Whenever the Vice President and a majority of either the principal officers of the executive departments or of such other body as Congress may by law provide, transmit to the President pro tempore of the Senate and the Speaker of the House of Representatives their written declaration that the President is unable to discharge the powers and duties of his office, the Vice President shall immediately assume the powers and duties of the office as Acting President.”

But Harris has filled in for Biden in the past.

Section 4 has never been invoked.