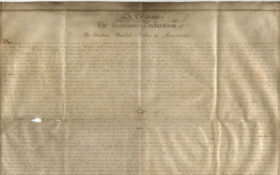 Called “The Sussex Declaration,” experts agree it’s not simply a copy of the original declaration — it’s an entirely “new” version, and it has major historical significance.

The Boston Globe reported that researchers Emily Sneff and Danielle Allen found the copy in a records office in Sussex, England.

The only other parchment version is maintained by the National Archives in Washington.

Sponsored: [BREAKING] A new version of the Bible has been discovered

The two dated the document to the 1780s. They say it was found in the archives in Chichester, and is believed to have originally belonged to a Duke of Richmond known as the “Radical Duke” for his support of Americans during the Revolutionary War.

The researchers said the signers on the Sussex version signed the document differently, which is historically significant. The signers are not broken down by state, something that distinguishes it from the copy in the National Archives.

Fans of John Hancock’s famous signature are disappointed to learn that, in the Sussex version, it is normal sized.

The parchment was likely made in New York or Philadelphia and either smuggled into England by American sympathizers, or bought and transported after the revolution.

“In an academic paper, the researchers say the document probably was commissioned by James Wilson of Pennsylvania, who later helped draft the Constitution and was among the original justices appointed to the Supreme Court,” The Boston Globe reported.

The two researchers wrote on the historic discovery: “The team hypothesizes that this detail supported efforts, made by Wilson and his allies during the Constitutional Convention and ratification process, to argue that the authority of the Declaration rested on a unitary national people, and not on a federation of states.”