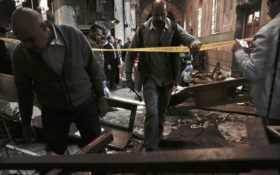 Egypt’s Coptic community held a funeral service on Monday for 25 Christians killed in a bombing the previous day at a church next to the main cathedral in Cairo — one of the deadliest attacks targeting the country’s religious minority in recent memory.

The bomb went off during Sunday Mass at a chapel adjacent to St. Mark’s Cathedral, seat of the ancient Coptic Orthodox church. No group has so far claimed responsibility for the attack. Those killed were mostly women and children.

At Monday’s service, the coffins of the victims were laid in front of the altar, with their names displayed on the side facing the congregation and on the church walls.

Candles and large big crosses made of white roses stood next to the coffins.

The spiritual leader of Egypt’s Orthodox Christians, Pope Tawadros II, led the service. At one point, the visibly distraught pontiff leaned on his staff and quietly prayed in front of the coffins. He had cut short a visit to Greece and flew home on Sunday after the bombing.

“God, protect us and your people from the conspiracies of the evil ones,” prayed the Coptic pope, who venerated the coffins with incense. In a sermon, he said: “It is the destiny of our church to offer martyrs and that is why we call it the ‘Church of the Martyrs.'”

“We are in so much pain over the evil that surrendered all the humanity and feelings that God entrusted in man,” said Tawadros. “Those who take a life, which is a divine gift, will be granted eternal damnation.”

Only victims’ relatives were allowed to attend the service at the Virgin Mary and St. Athanasius church in the eastern Cairo suburb of Nasr City. Some of them screamed out in grief or shouted out a victim’s name, while the rest quietly sobbed or sat somberly during the service.

Outside the church, scores scuffled with security forces when they were barred from attending the service. An unspecified number of arrests were made, several witnesses said, speaking on condition of anonymity because they feared for their safety.

“People have a volcano of anger inside their chests,” said Nora Sedki, a Christian government employee who joined a demonstration of several hundred protesters outside the church.

“The blood of our brothers is dear,” chanted the protesters, who carried Egyptian flags and crosses made of tree branches.

“The Mother of the Martyrs … crossed the seas of agonies,” the congregation inside the church sang, alluding to the Orthodox Church. Some of the women at the service ululated, a ritual meant to signify the victims are martyrs who will go to Heaven.

Scores of black-clad monks, bishops and Orthodox priests attended the service, which was carried live by state television and private TV networks.

Previously, the deadliest attack against Egypt’s Christians was a New Year’s Day bombing in 2011 in the Mediterranean city of Alexandria, for centuries the seat of the Orthodox Coptic church. At least 21 were killed in that attack.

The coffins were later carried out of the church and loaded onto ambulances that would take them to a parade ground, also in Nasr City, where a state funeral was due to be held later Monday. President Abdel-Fattah el-Sissi, who declared a three-day state of mourning following the attack, will attend the funeral. Earlier Monday, el-Sissi chaired a meeting with his prime minister and police and army chiefs to discuss the country’s security following Sunday’s attack.

Some women passed out as the coffins were taken out of the church. Others called out the names of the victims in anguished screams. A church band of boy and girl scouts played a mournful march on drums as the coffins emerged from the church.

Vatican said Francis told the Coptic patriarch that the Catholic Church was “united in the blood of our martyrs.” Francis has frequently denounced the indiscriminate nature of Islamic attacks against Christians.

The bomb in Cairo went off during Sunday Mass at a chapel adjacent to St. Mark’s Cathedral, seat of the ancient Coptic Orthodox church. No group has claimed responsibility. Most of those killed were women and children.

Egypt has seen a wave of attacks by Islamic militants since 2013, when the military overthrew President Mohammed Morsi, a freely elected leader and a senior Muslim Brotherhood official. Many of his supporters blamed Christians for supporting his ouster, and scores of churches and other Christian-owned properties in southern Egypt were ransacked that year.

Since 2013, authorities have waged a sweeping crackdown, outlawing the Muslim Brotherhood, jailing thousands of mostly Islamist dissidents and killing hundreds in street clashes.

Egypt’s Christians have long complained of discrimination, saying they are denied top jobs in many fields, including academia and security forces.

The church and many Christians have rallied behind el-Sissi, although there have been growing voices of dissent in the community. They say little has changed under his rule, with authorities failing to halt attacks on their churches and property.