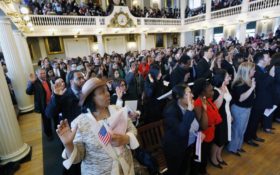 About 200 immigrants will be sworn in as new U.S. citizens at the John F. Kennedy Presidential Library and Museum in Boston.

The library will present everyone with a commemorative edition of Kennedy’s inaugural address.

Kennedy served as America’s 35th president and also was the nation’s first Irish-Catholic commander in chief. His great-grandparents immigrated to the country from Ireland.

The ceremony is sponsored by the U.S. Department of Justice and the U.S. Citizenship and Immigration Services.