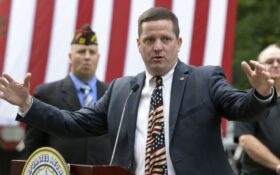 Two former administrators of a Massachusetts veterans home where nearly 80 people sickened by the coronavirus died pleaded not guilty Thursday to criminal charges over their handling of the outbreak.

Judge Edward McDonough released them without bail and with no conditions until their next court date in February.

The two each face 10 counts stemming from their March decision to cram residents who were positive for the coronavirus into the same space as those with no symptoms.

They were charged in September with abuse, neglect or mistreatment of an elderly or disabled person, among other counts.

An independent report commissioned by the state said “utterly baffling” decisions made by administrators allowed the virus to spread unchecked at the veterans home. Walsh, who resigned, has argued they’re being scapegoated by state officials.

At least 76 veterans died from the virus over 11 weeks, and many more residents and staff were sickened.