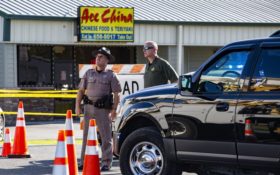 Authorities say two Florida sheriff’s deputies were shot dead through the window of a Chinese restaurant by a man who then killed himself.

The shooter was identified as a man from a small town just up the road from the restaurant, and his motive wasn’t immediately known, but the sheriff blamed Thursday’s killings on hatred toward law enforcement.

“What do you expect happens when you demonize law enforcement to the extent it’s been demonized? Every type of hate, every type of put-down you can think of,” Gilchrist County Sheriff Bobby Schultz said at a news conference.

This shooter was a “coward,” the sheriff said.

President Donald Trump called the slain deputies “HEROES” in a tweet sharing his condolences with their friends, families and colleagues.

Sgt. Noel Ramirez, 30, and Deputy Taylor Lindsey, 25, were killed while getting food at the Ace China restaurant in Trenton, about 35 miles (56 kilometers) west of Gainesville.

The shooter, found dead in a car outside, was identified as John Hubert Highnote, 58, of Bell, a small town just up the road.

“It appears he just walked up and shot them, then went to his car and shot himself. It’s inexplicable,” State Attorney Bill Cervone said. “People will want to know why, and we may never have an answer for them.”

“Sgt. Ramirez and Deputy Lindsey were the best of the best,” Schultz said. “They were men of integrity, men of loyalty. They were God-fearing, and they loved what they did, and we are very proud of them.”

Schultz said he rushed to the scene, and then had the difficult task of calling the families of Ramirez, who is survived by his wife and two young children, and Lindsey, who joined the sheriff’s office in 2013.