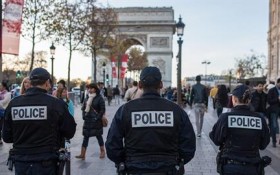 Austrian authorities say two men have been arrested and are being investigated for possible links to last month’s attacks in Paris that killed 130 people.

State Prosecutor Robert Holzleitner says the two were arrested during the weekend in a migrants’ shelter in Salzburg.

Holzleitner said Wednesday that the pair are suspected of “participation in a terrorist organization,” with investigations focused on their possible connection to the Nov. 13 attacks.

He said the two arrived in Europe from the Middle East but refused to give further details.