Beloved comedian to be immortalized - The Horn News 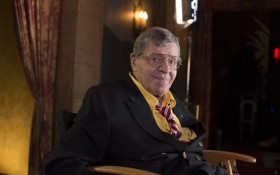 An extensive archive from comedian Jerry Lewis’ career, including rarely seen films, long-lost TV recordings and home videos, will have a new home at the Library of Congress, curators announced Monday.  The move will effectively immortalize the beloved comedians decades of work for generations to come.

The collection includes thousands of documents and recordings. Lewis is donating some items, while others are being purchased by the library from his personal archive. Some materials will be available immediately to researchers in Washington.

The archive chronicles Lewis’ more than 70 years in comedy. Conservators said the recordings will fill significant gaps in TV history, including Lewis’ appearances with Dean Martin on NBC’s “Colgate Comedy Hour” and on “The Tonight Show.” The network reused video tape and recorded over many shows until the 1970s. Many recordings from the 1950s and 1960s don’t exist elsewhere, said Mike Mashon, head of the library’s moving image section.

Lewis said he has been dedicated to making people laugh. He was born into a vaudeville family and began performing at age 5.

“If I get more than three people in a room, I do a number,” he said in a statement. “Knowing that the Library of Congress was interested in acquiring my life’s work was one of the biggest thrills of my life. It’s comforting to know that this small piece of the world of comedy will be preserved and available for future generations.”

Highlights from the collection include 35 mm prints of many of Lewis most popular films, including “The Bellboy,” ”The Errand Boy” and “The Family Jewels.” There is also test footage from films, including a silent comedy filmed on the set of “The Patsy,” and rare footage of Martin and Lewis performing their nightclub act.

Even when he wasn’t shooting a film or TV feature, Lewis was still often performing for fun. Home movies capture some of the “boundless creativity this man had,” even if it was just for his own pleasure, Mashon said. Lewis even produced fully scripted movies at home, starring some of his neighbors.

Curators were particularly interested in Lewis’ archive because he was one of the most creative figures in American pop culture in the late 20th century, Mashon said, adding that the comedian excelled on stage, screen, radio and television. By keeping and organizing so many of his materials, Lewis was “an archivist’s dream,” Mashon said.

Librarian of Congress James Billington said the collection will give the world a more complete picture of Lewis as a performer, director, producer, artist, educator and philanthropist.

“He is one of America’s funniest men who has demonstrated that comedy as a medium for laughter is one of humanity’s greatest gifts,” Billington said.