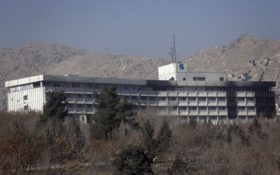 Survivors of the Taliban attack on Kabul’s Intercontinental Hotel recounted on Monday the ordeal of the deadly, 13-hours-long weekend standoff that claimed 18 lives, including 14 foreigners.

The siege ended on Sunday with Afghan security forces saying they had killed the last of six Taliban militants who stormed the hotel in suicide vests late the previous night, looking for foreigners and Afghan officials to kill.

More than 150 people were rescued or managed to escape, including 41 foreigners. Eleven of the 14 foreigners killed were pilots and employees of KamAir, a private Afghan airline. A statement by KamAir later said some of its flights were disrupted because of the attack.

Six Ukrainians, two Venezuelan pilots for KamAir and a citizen from Kazakhstan were among the those killed in the attack on the hotel,

Mohammad Humayun Shams, the telecommunications director of eastern Laghman province who was visiting Kabul and staying at the hotel, said he was able to escape by jumping into a tree form a hotel window as the attackers roamed the hallways, killing people.

“It was the worst night of my life,” Shams said, adding that as he ran, he didn’t know who were the police and who were the Taliban — they all had the same type of uniforms.

Afghan authorities have not confirmed the attackers wore police uniforms. Security officials said 34 provincial officials were at the hotel for a conference organized by the Telecommunication Ministry.

On Monday, Afghan security forces remained positioned on all the roads leading to the hotel, barring everyone from access to the area.

Jawad Zia, the director at the Kabul Intercontinental, which is not part of the InterContinental chain, said dozens of the hotel rooms were damaged in the attack.

“We have damaged rooms in each floor of the hotel,” he told The Associated Press over the phone.

Among Afghans killed in the attack was a telecommunications official from western Farah province; Waheed Poyan, Afghanistan’s newly appointed consul general to the Pakistani city of Karachi; and Ahmad Farzan, an employee of the High Peace Council, a commission created to facilitate peace talks between the Afghan government and the Taliban and other opposition groups.

Along with Shams, five other hotel guests, including a foreigner, managed to jump into the tree. From there, they climbed down to the ground and Shams called the police with his mobile.

They were told to stay put until the police came to take them away, hours later.

“I am still in shock … in fact can’t believe I am alive” he added.