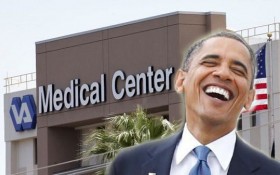 McDonald publicly apologized after a Republican senator called for his resignation and GOP lawmakers and veterans’ service groups slammed his remarks as insulting and inappropriate.

McDonald said at a breakfast Monday that the VA should not use wait times as a measure of success, comparing waits for VA health care to the hours people wait for rides at Disney theme parks. McDonald said a veterans’ health-care experience was more important than the time spend waiting for an appointment.

“Dismissing wait times when veterans can often wait months for an appointment is negligent and a clear sign that new leadership is needed at the VA,” Blunt said as he called for McDonald to step down.

House Speaker Paul Ryan, R-Wis., called McDonald’s comments “disgusting and beyond the pale,” although he stopped short of calling for him to step down.

“This is not make-believe. This is not Disneyland, or Wonderland, for that matter,” Ryan told reporters. “Veterans have died waiting in line for their care.”

Republicans said McDonald’s comments were especially egregious since he took office in 2014 after his predecessor was forced out amid a scandal over chronically long wait times at VA health care sites and reports that as many as 40 patients died while awaiting care at the Phoenix VA hospital. Similar problems were discovered at VA health sites nationwide, along with a widespread practice among VA employees of creating secret lists to cover up the long wait times and receive VA bonuses.

Rep. Cathy McMorris Rodgers of Washington state, a member of the Republican leadership, said McDonald’s comments were hard to believe. “When you go to Disneyland, you aren’t wondering if you are going to live long enough to make it to Space Mountain,” she said.