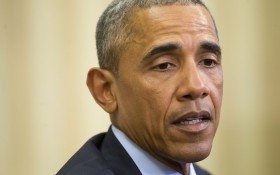 If there was ever anyone who deserved the death penalty, it is alleged Benghazi killer Ahmed Abu Khattala.

But it looks like the Obama administration has just cut a secret deal to spare his life.

The Justice Department has announced it will not seek the death penalty against Abu Khattala, the suspected Libyan militant charged in the Benghazi attacks that killed a U.S. ambassador and three other Americans, federal officials announced Tuesday.

The department revealed its decision, which pushes the case forward toward trial, in a brief court filing that offered no additional explanation.

In a separate statement, spokeswoman Emily Pierce said the Justice Department made the decision after reviewing the case and consulting with federal prosecutors. She said the department is “committed to ensuring that the defendant is held accountable” for the 2012 attacks.

Abu Khattala, captured by U.S. special forces in Libya two years ago and brought to the U.S. aboard a Navy ship, has been awaiting trial in federal court in Washington in connection with the September 2012 violence at a diplomatic compound in Benghazi. Prosecutors have described him as a ringleader of the attacks, which quickly emerged as a political flashpoint and became the topic of congressional hearings involving Democratic presidential candidate Hillary Clinton, secretary of state at the time of the rampage.

The 18-count indictment arises from a burst of violence that began the night of Sept. 11, 2012, at a State Department diplomatic compound, an attack prosecutors say was aimed at murdering American personnel and plundering maps, documents and other property from the post.

Abu Khattala has pleaded not guilty to charges including murder of an internationally protected person, providing material support to terrorists and destroying U.S. property while causing death.

Assuming it doesn’t resolve through a plea agreement, a trial of Abu Khattala would represent one of the most significant terrorism prosecutions in recent years.

Since arriving in the United States, Abu Khattala has made multiple court appearances alongside his lawyers. He sought unsuccessfully to have the case against him dismissed last year, and a separate request for him to be returned to Libya was also denied.