US soldier killed by ISIS in Syria - The Horn News 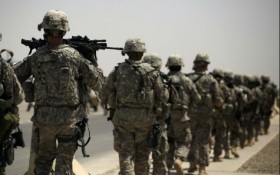 A U.S Navy SEAL was killed Tuesday by fire from the Islamic State group outside the IS-held city of Mosul, and Defense Secretary Ash Carter acknowledged it as a “combat death” as the U.S. expands its role in the northern part of Iraq.

The SEAL, who has not been further identified, is the third U.S. serviceman to die while fighting in Iraq since the U.S.-led coalition launched its campaign against the Islamic State in the summer of 2014. In October, a special operations soldier was killed in a raid on an IS prison in northern Iraq. In March, an American Marine was killed in an IS attack at a newly established U.S. base outside Mosul.

Over the course of the nearly two-year U.S. led campaign against the Islamic State group, the Pentagon has slowly expanded the American role in Iraq and increased the presence of U.S. troops.

A U.S. defense official, speaking on condition of anonymity because he wasn’t authorized to discuss the incident publicly, said the American was killed with small arms fire suggesting that Islamic State fighters likely came within a few hundred yards of the U.S. forces.

The identity of the SEAL was not immediately known in line with military procedure to first notify next of kin.

The Americans were two to three miles behind that front line before the attack was launched, the official added.

U.S. forces will continue to stay “deliberately behind the front lines,” the defense official said, but he acknowledged that the U.S. expects more ground fighting as the Iraqi and Kurdish militaries, backed by the U.S., push further into Islamic State-controlled territory.

Maj. Gen. Jaber Yawer, the Kurdish peshmerga spokesman, told The Associated Press that the American was killed by IS sniper fire near the town of Teleskof during an IS attack Tuesday that also involved a number of car bombs.

The pace of operations against IS is expected to increase in coming months as Iraqi forces prepare to retake Mosul, the country’s second-largest city, which has been in the hands of IS militants since 2014.

In March, the Pentagon announced the establishment of a small U.S. Marine base outside Mosul. The announcement followed an IS attack on the base that killed one Marine and wounded several others.

The first U.S. service member killed in Iraq was a special operations solider killed in a firefight in October 2015 during a raid on an Islamic State group prison.

Both Vice President Joe Biden and Defense Secretary Carter have recently visited Baghdad in an effort to resolve internal political strife and concentrate on the effort to defeat the Islamic State group. The Obama administration has been pressing the effort against IS, which has been slowed down in its quest to overrun Iraq.