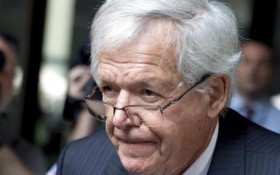 The man, identified in court documents as Individual A, filed the lawsuit in Yorkville, the northern Illinois city where Hastert was a high school teacher and wrestling coach when, prosecutors believe, he molested at least four boys decades ago.

Prosecutors said the statute of limitations on the sex crimes ran out long ago, so they could only charge the 74-year-old Republican with dodging banking regulations when he withdrew the hush money. Hastert pleaded guilty to the federal banking charges in October and is scheduled to be sentenced Wednesday in Chicago. He faces a maximum sentence of five years in prison.

Hastert’s attorneys, through a spokeswoman, declined to comment on the lawsuit Monday.

“They didn’t give us the courtesy of a response,” she said.

In the lawsuit, the man, who is identified as James Doe, said he was 14 years old when Hastert offered to take him to a wrestling camp before he went to high school. The man said Hastert sexually abused him in a motel room where he and Hastert were staying alone, adding that Hastert was a “trusted friend” of his family.

In the years following the abuse, the man “suffered severe panic attacks which lead to periods of unemployment, career changes, bouts of depression, hospitalization, and long-term psychiatric treatment,” according to the lawsuit.

But it wasn’t until 2008, when the man said he learned he wasn’t Hastert’s only victim, that he confronted the powerful former Illinois congressman, who as speaker of the House was third in line to the presidency. Hastert acknowledged “the life-long pain and suffering he caused” the man, according to the lawsuit.

The man asked to be compensated for the pain and suffering Hastert caused, and the two agreed to the $3.5 million the man suggested, the lawsuit states. The lawsuit alleges Hastert paid the man $1.7 million between June of 2010 and December of 2014, but that he hasn’t paid the rest.

Hastert’s attorneys earlier this month raised the possibility of such a lawsuit in a document asking the judge to be lenient on the former speaker, saying in the court filing that Individual A might sue Hastert if he weren’t paid the rest of the money.

Prosecutors have portrayed the $3.5 million agreement between Hastert and Individual A as an agreement akin to an out-of-court settlement. Government court filings characterize the $3.5 million figure as just compensation for the trauma Hastert’s sexual abuse caused.

Federal agents investigated the possibility that Individual A was extorting Hastert, but ruled it out.

“After FBI monitoring of conversations between my client and Hastert, they concluded that my client was seeking compensation for the injuries caused by Mr. Hastert,” Brown said. “I think our complaint is straightforward. It is a breach-of-contract case.”

Jeffrey Granich, an attorney who practices criminal and civil law in Chicago but is not involved in the case, said the lawsuit may seem odd at first blush because of the questions raised early on about possible extortion.

But from a legal standpoint, he likened the arrangement to a non-disclosure agreement. Those agreements are frequently enforced through court action, even if they’re verbal rather than written.

“It’s rather unorthodox and unusual, but if they had a verbal agreement I don’t see why it can’t be enforced,” Granich said.

Brown said she couldn’t comment on whether the possibility of Hastert going to prison would have an effect on compensation for her client.

“I don’t know anything about his resources,” she said. “I have no reason not to believe that our lawsuit will go forward if he is sent to prison.”