10 times Obama lied to our troops - The Horn News 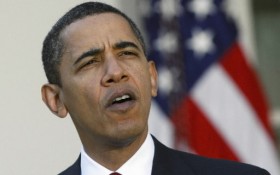 While building up public support for military intervention in Syria, President Barack Obama repeatedly told the American people there would be no U.S. ground troops committed in the future.

Obama on Monday broke this promise when he announced the decision to send 250 more troops to Syria as a bid to keep up “momentum” in the campaign to dislodge Islamic State extremists.

Will the mainstream media hold Obama accountable for going back on his word to our troops and the public?

Probably not, but luckily The Horn News is here to keep things honest! Below are ten times that Obama lied about U.S. “boots on the ground” in Syria.

“So the key point that I want to emphasize to the American people: The military plan that has been developed by our Joint Chiefs — and that I believe is appropriate — is proportional. It is limited. It does not involve boots on the ground. This is not Iraq, and this is not Afghanistan.”

“What we’re not talking about is an open-ended intervention. This would not be another Iraq or Afghanistan. There would be no American boots on the ground. Any action we take would be limited, both in time and scope, designed to deter the Syrian Government from gassing its own people again and degrade its ability to do so.”

“Many of you have asked, won’t this put us on a slippery slope to another war? One man wrote to me that we are ‘still recovering from our involvement in Iraq.’ A veteran put it more bluntly: ‘This nation is sick and tired of war.’ My answer is simple: I will not put American boots on the ground in Syria. I will not pursue an open-ended action like Iraq or Afghanistan. I will not pursue a prolonged air campaign like Libya or Kosovo. This would be a targeted strike to achieve a clear objective: deterring the use of chemical weapons and degrading Assad’s capabilities.”

“With respect to the situation on the ground in Syria, we will not be placing U.S. ground troops to try to control the areas that are part of the conflict inside of Syria. I don’t think that’s necessary for us to accomplish our goal. We are going to have to find effective partners on the ground to push back against ISIL.”

“(You) cannot, over the long term or even the medium term, deal with this problem by having the United States serially occupy various countries all around the Middle East. We don’t have the resources. It puts enormous strains on our military. And at some point, we leave. And then things blow up again. So we’ve got to have a more sustainable strategy, which means the boots on the ground have to be Iraqi. And in Syria, the boots on the ground have to be Syrian. … I will reserve the right to always protect the American people and go after folks who are trying to hurt us wherever they are. But in terms of controlling territory, we’re going to have to develop a moderate Sunni opposition that can control territory and that we can work with. The notion that the United States should be putting boots on the ground, I think would be a profound mistake. And I want to be very clear and very explicit about that.”

“Yes, there are always circumstances in which the United States might need to deploy U.S. ground troops. If we discovered that ISIL had gotten possession of a nuclear weapon, and we had to run an operation to get it out of their hands, then, yes, you can anticipate that not only would Chairman Dempsey recommend me sending U.S. ground troops to get that weapon out of their hands, but I would order it. So the question just ends up being, what are those circumstances? I’m not going speculate on those. Right now we’re moving forward in conjunction with outstanding allies like Australia in training Iraqi security forces to do their job on the ground.”

“The resolution we’ve submitted today does not call for the deployment of U.S. ground combat forces to Iraq or Syria. It is not the authorization of another ground war, like Afghanistan or Iraq. … As I’ve said before, I’m convinced that the United States should not get dragged back into another prolonged ground war in the Middle East. That’s not in our national security interest, and it’s not necessary for us to defeat ISIL. Local forces on the ground who know their countries best are best positioned to take the ground fight to ISIL, and that’s what they’re doing.”

“There are no current plans to do so. That’s not something that we currently discussed. I’ve always said that I’m going to do what’s necessary to protect the homeland. One of the principles that we all agree on, though, and I pressed folks pretty hard because in these conversations with my military advisers I want to make sure I’m getting blunt and unadulterated, uncensored advice. But in every one of the conversations that we’ve had, the strong consensus is that in order for us to succeed long-term in this fight against ISIL, we have to develop local security forces that can sustain progress. It is not enough for us to simply send in American troops to temporarily set back organizations like ISIL, but to then, as soon as we leave, see that void filled once again with extremists.”

The new deployment brings the number of U.S. military personnel in Syria from roughly 50 to roughly 300. It follows a similar ramp-up in Iraq, announced last week. The new Syria forces will include special operation troops assisting local forces, as well as maintenance and logistics personnel.