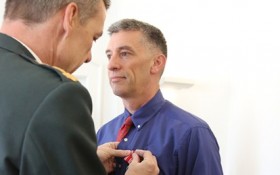 Islamic State fighters had a frightening target in their sights — a school in Denmark. The horrific attack was meant to shock the world and kill as many schoolchildren as possible.

Thanks to U.S. Army Captain Bradley Grimm, they never got the chance.

“Capt. Bradley Grimm provided ‘actionable intelligence’ gleaned from captured documents in Iraq about foreign fighters from Denmark that included information on threats against a Danish school using homemade explosives, according to Col. Steve Warren, a spokesman for the coalition fighting ISIS,” CNN reported.

Grimm reportedly helped develop the intelligence-sharing system that thwarted the attack and led to at least one arrest.

For his efforts above and beyond the line of duty, Grimm was awarded the Danish Defense Medal for Special Meritorious Effort by the Danish Chief of Defense, General Peter Bartram, in a special ceremony.

The Islamic terrorists had plotted the attack as revenge for a recent expansion of Danish efforts in the fight against ISIS, which their parliament approved earlier this week.

As a member of the 45 nation coalition to defeat ISIS, Denmark currently contributes aircraft, air defense radar, and training to friendly Iraqi forces.