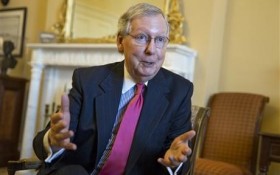 If the Republican presidential nomination was a card game, Senate Majority Leader Mitch McConnell seems confident the establishment’s ace in the sleeve can keep frontrunner Donald Trump from winning.

McConnell says he is “increasingly optimistic” that voting at the Republican National Convention in July will go to a second ballot, seeming to suggest he does not want to see Trump become the nominee.

The Kentucky Republican has studiously sought to remain neutral in public, although he has on occasion condemned Trump’s remarks and reportedly told senators in private earlier this year that down-ballot Republicans might drop Trump “like a hot rock.”

McConnell’s comments on WHAS-TV in Louisville over the weekend gave additional insight into his thinking.

McConnell explained the convention process that requires a candidate to amass the support of 1,237 delegates in order to clinch the nomination. While it’s still possible for Trump to reach that number ahead of the GOP convention in Cleveland, it’ll be tough for him to do. And if he doesn’t succeed, voting would then proceed to a second ballot, with a majority of delegates free to vote for whomever they choose.

“I’m increasingly optimistic that there actually may be a second ballot,” McConnell said.

“I want somebody who can win in November and the whole process is about trying to beat Hillary Clinton in November,” he said. “And I think our delegates, if they end up actually having the latitude to make a decision, which would occur on the second and third ballot, are going to be interested in who can win.”

He said it would then be up to Trump, challengers Sen. Ted Cruz of Texas and Gov. John Kasich of Ohio, “or anyone else,” to make the electability argument.

McConnell said that he anticipates he himself will be a delegate, and “on the second ballot I’ll be free to do whatever I want.”

In response to his interviewer’s questions, McConnell ruled himself out of contention, although there has been little if any talk about such a scenario. He also said he believes House Speaker Paul Ryan’s disavowals of interest in the nomination, something that remains a topic of speculation despite Ryan’s attempts to shut it down.

“It really will be up to the delegates,” McConnell said. “I mean this notion that there’s some group of people in Washington that can handpick somebody and deliver it is not true. If there were such a group I would probably be a part of it, but there isn’t a group.”