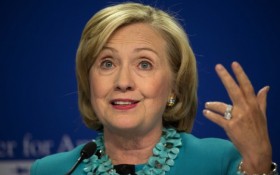 As New York prepares for its most meaningful presidential primary in decades, some of the candidates’ most passionate supporters are finding out they will be spending Election Day on the sidelines.

According to a recent emergency lawsuit filed in a Long Island federal court, there have been “reports of thousands of NY voters being erroneously purged from the rolls.”

Many of these purged voters seem to be Bernie Sanders supporters, leading to fresh questions about whether Hillary Clinton’s campaign is trying to steal the New York primary.

Under state laws, only registered Democrats can vote in today’s Democratic primary. That has led thousands of Sanders supporters in recent months to register as Democrats so they could vote.

Now, many of those voters are learning that their registrations have been misfiled or have inexplicably gone missing. This is eerily similar to what happened in at least one other state where Clinton ended up eking out a victory.

The recently formed Election Justice USA, with signatures from over 200 disenfranchised voters, has filed an emergency lawsuit, asking New York to change today’s contest to an open primary so Sanders voters don’t get shut out.

“We were seeing an alarming number of voter affiliations changed without people’s knowledge or consent, people who were registered listed as not registered,” Shyla Nelson, a spokeswoman for Election Justice USA, said. According to a report from The Gothamist:

“One plaintiff, a 24-year-old from Suffolk County, says that he registered as a Democrat in 2009, and that a change of affiliation form the BOE showed him, supposedly proving he left the party, bears a signature that is an “identical, pixel-by-pixel” copy of the signature on his driver’s license. Another plaintiff, a 58-year-old from upstate Onondaga County, had been registered as a Democrat since 1989, but on April 11th found that her registration was “purged.” An employee of the county told her that the change was a clerical error, but that she would not be able to vote on Tuesday, according to the suit. Others named in the lawsuit registered for the first time within days of the new voter deadline in March, or the party-change deadline last October.”

Critics of Clinton were quick to point out that her campaign has been accused of similar dirty tricks in the recent past.

In Massachusetts, where Clinton won by a meager two percent, “on the day of the primary, Bill Clinton was accused of unethical (and very likely illegal) electioneering in the Boston area,” The Huffington Post reported.

Following the Arizona primary, more than 210,000 have signed a White House petition asking for a federal investigation after “voters showed up to the polls only to find that they were listed as independents, Republicans, or had no party affiliation at all.”

Similar instances seem to be occurring in New York. For example, in Brooklyn — birthplace of Vermont Sen. Bernie Sanders — “state voter enrollment statistics found that the number of active registered Democrats dropped there by 63,558 voters between November 2015 and April 2016,” according to local public radio station WNYC.

“No city or state election official could explain to WNYC why the number had dropped in a borough that’s been a hotbed of campaign activity, and has the highest population in the state, raising the perennial concern that there will be chaos at the polls on Tuesday caused in part by the very agency responsible for overseeing voter registration and election administration: the Board of Elections.”

Missing or misfiled registration isn’t the only complaint coming from New York. Critics are also complaining of restrictive ballot rules that they say disenfranchise millions of New Yorkers.

So for the 3.2 million New Yorkers that find themselves registered with no party or a minor one, they are out of luck if they want to influence the outcome of the Democratic or Republican races.

About 20 states now hold “open primaries” that allow independent voters to cast ballots in the presidential primary of their choice, but that list doesn’t include some of the biggest prizes on the election calendar, including New York, Florida and Pennsylvania.

Several dozen supporters of changing the system in New York held a rally Thursday, saying it was one of a number of factors that have depressed turnout in past state elections.

“New York state has some of the most archaic voter laws in the entire country,” said state Assemblyman Fred Thiele, an independent from Long Island. “It’s hard to register to vote. It’s hard to get an absentee ballot. There’s no early voting in New York. There’s no voting by mail. If you want to vote in New York you really have to want to, and even if you want to vote sometimes they won’t let you vote.”

“Turnout in recent elections in New York has been abysmal and yet our laws often prevent, rather than encourage, people from participating,” said New York City Comptroller Scott Stringer, who supports changes to state law including Election Day registration and greater access to absentee ballots.