Olympics in danger as Brazil plunges into turmoil - The Horn News 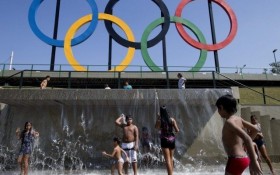 The 367-137 vote was well over the 342 votes needed for the proceedings to move ahead to the Senate, where a majority vote will determine whether Rousseff is put on trial and suspended while Vice President Michel Temer temporarily takes over.

The deepening crisis comes as Brazil grapples with problems on multiple fronts. The economy is contracting, inflation is around 10 percent and an outbreak of the Zika virus, which can cause devastating birth defects, has ravaged parts of northeastern states.

Rio de Janeiro is gearing up to host the Olympics in August, but sharp budget cuts have fueled worries about whether the country will be ready.

There have been particular concerns that pollution in Rio de Janeiro waterways could put Olympic athletes at risk. Now, with the Brazilian political landscape being thrown into confusion, sports fans fear this could be the final blow that kills the event.

Rousseff is accused of using accounting tricks in managing the federal budget to maintain spending and shore up support. She has said previous presidents used similar maneuvers and stressed that she has not been charged with any crimes or implicated in any corruption scandals.

However, she failed to secure the support she needed, and more than the necessary two-thirds of lawmakers in the Chamber of Deputies voted to oust her.

“What an honor destiny has reserved for me!” shouted Bruno Araujo, a member of Socialist Democratic Party, upon making the decisive “yes” vote. Both cheers and boos erupted as Araujo waved his arm in the air.

With at least 342 of 513 deputies voting in favor, the measure passed. Several lawmakers had yet to vote, so the final tally could be an even wider victory for the opposition.

The measure now goes to the Senate. If by a simple majority the Senate votes to take it up and put the president on trial, Rousseff will be temporarily suspended.

In that case, Vice President Michel Temer would take on the presidential duties and the Senate would have 180 days to conduct a trial against Rousseff. Senate leader Renan Calheiros has suggested his body would consider the measure within a month, but no date has been set.

Rousseff has options. She could appeal to the Supreme Federal Tribunal, Brazil’s highest court, on the grounds that the accusations are faulty. She has hinted she might do so.

She could also heavily lobby senators and at the same time use the union muscle of her Worker’s Party to bring thousands to the streets to pressure the Congress.

“This is just beginning,” said Jose Guimaraes, who is a member of the Worker’s Party. “It’s going to be a slow and gradual war that we’ll undertake.”

Watchdog groups and political analysts often cite a jaw-dropping tally: About 60 percent of the 594 members of Congress are facing corruption and other charges.

Just below the surface throughout the debates in the Chamber of Deputies was the “Car Wash” investigation, a probe into a kickback scheme so vast that dozens of top politicians and businessmen have already been jailed.

While Rousseff herself has not been implicated, the kickbacks at state oil company Petrobras allegedly happened on her watch and that of former President Luiz Ignacio Lula da Silva. While many lawmakers and regular citizens blame her for letting the graft happen, many sitting lawmakers are accused in the scandal.