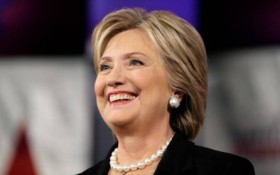 While Americans are rushing to file their taxes before this year’s looming deadline, Hillary Clinton thinks the government isn’t taking enough of their hard-earned money – not by a long shot.

This week she unveiled a job-killing economic plan that would raise taxes by $1 trillion dollars over 10 years.

Hillary told the editorial board of the New York Daily News that, yes, she will spend more money than Barack Obama on new, big government programs. Clinton says she has mapped out a series of tax hikes to show how taxpayers will pay the bill.

Her new so-called “investments” will be paid for “with the taxes that I think have to be raised,” she said on April 9. “I would spend about $100 billion a year.”

She told the editors that would total a staggering one trillion dollars in new taxes over ten years.

Some of that comes from raising taxes on millionaires and increasing the capital gains tax – making it less profitable to do business or invest.

But, financial experts say, the wealthy aren’t the only ones who will pay. Average Joe’s will get smacked with a huge tax bill, too.

Her tax-the-rich scheme would discourage savings and investment and punish success – a plan economists warn will slow down an economy already struggling under the weight of a $19 trillion dollar debt.

In all, she would enact 18 separate tax increases, not including taxes on businesses, which she has yet to unveil.

Financial experts also note that businesses pay for tax hikes by passing the cost on to consumers through higher prices. In other words, corporations don’t pay taxes; you do.

Politico reported that Hillary would also “dump tax breaks for the oil and gas industries,” leaving Americans to pay more at the pump just as prices are beginning to decline.

The Tax Foundation found that her tax plan alone will decrease GDP by disastrous one percent.

To put that in perspective, that will “translate into 0.8 percent lower wages” for every American and “311,000 fewer full-time equivalent jobs,” the group says.

That means under a Clinton presidency, the poorest of poor families will be hit for over $4,000 a year more in taxes – at minimum.

Well off taxpayers — the top 1 percent — get soaked for an incredible $78,284 per person in new taxes, not including how the faltering economy would reduce their income.

The tax hikes comes despite the fact that Americans in 2016 paid more of their incomes in taxes at all levels of government than they spent on food, clothing, and shelter, according to the Tax Foundation.

You don’t even need to be alive to contribute to Hillary’s big government coffers. Her plan would raise the death tax by five percent so that, after a lifetime of paying taxes, Uncle Sam will take almost half of what the wealthiest Americans have left over.

Instead of cutting taxes and stimulating economic growth, Hillary is more likely to try to buy the votes of the poorest Americans by promising new “free” programs that will supersize government.

Short-sighted voters are happy to cash in under the illusion that the money is coming from someone else, until the bill comes due, or her plan produces trickle-down pain through every level of the economy.

“It’s worse than Obama, if you can believe it,” said Art Laffer, the architect of supply-side economics.

If politicians enact another four years of Democratic tax-and-spent policies, he said, America “will turn out to be Venezuela.”