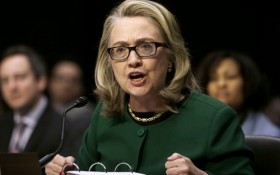 It took a court order for it to finally be released, but critics say the wait was worth it.

A newly released transcript has provided smoking-gun proof to what critics of former Secretary of State Hillary Clinton had long suspected — Clinton deliberately lied to the American people about the 2012 Benghazi attacks.

And there’s no denying it anymore.

On September 11, 2012 — the day of the Benghazi attacks that claimed four American lives — Clinton put out a statement on behalf of the State Department where she blamed the attack on an anti-Muslim Internet video.

But the next day, in a conversation with the then-prime minister of Egypt , Clinton admitted she knew that wasn’t true.

According to the transcript obtained by Judicial Watch, “in her 7:49 PM September 12 conversation with Hisham Kandil, Clinton said, ‘We know the attack in Libya had nothing to do with the film.  It was a planned attack – not a protest.’

Kandil responded, ‘You’re not kidding. Based on the information we saw today we believe that group that claimed responsibility for this is affiliated with al-Qaeda.'”

The possible existence of this phone transcript was first revealed during Congressional investigations of Clinton. But the State Department did everything in it’s power to prevent it from becoming public.

Despite a Freedom of Information Act request from Judicial Watch seeking the transcript, it took two federal court orders before the State Department released it.

Similarly, Judicial Watch litigation also forced the release of the September 11, 2012 email in which Clinton informed her daughter by email that the attack had been staged by an ‘Al Qaeda-like group,’ rather than as the result of an Internet video.

The rush to blame the Benghazi attacks on a video was an attempt by the Obama administration to make the violence look spontaneous. But the fact that terror groups operating in the area were behind the attacks raises fresh questions about whether Clinton did enough to protect U.S. diplomats.

“There are two scandals here. The first is Hillary Clinton was telling different stories to different foreign leaders about the Benghazi attack – including an admission that it was a terrorist attack,” said Judicial Watch President Tom Fitton in his group’s official statement. “The second is the State Department’s cover-up of these documents.  The State Department is forcing Judicial Watch to play ‘whack-a-mole’ with Clinton and Benghazi documents.  It is no wonder that two frustrated federal court judges granted Judicial Watch discovery into the Clinton FOIA issues.”