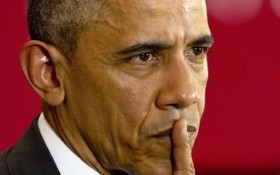 President Barack Obama’s presidency has been riddled with mistakes and outright foolish decisions. In an interview with Fox News that aired Sunday, Obama revealed that he thought his biggest mistake was how he handled the power change in Libya in 2011.

But why stop there? We’ve compiled a countdown of what we consider Obama’s top 5 presidential blunders. Tell us what we missed!

Well, we actually agree with Obama on this one. Obama himself acknowledged that not anticipating the aftermath of the death of Libyan dictator Moammar Gadhafi was a grave oversight.

With no follow-up plan to the US-led airstrikes that caused the toppling of the Libyan government, Islamic extremists were able to gain traction in Libya. In September of 2012, they stormed a Benghazi consulate, tragically murdering a U.S. ambassador and three other Americans.

And that blood, on some level, is on Obama’s hands.

As of today, the country remains in a state of turmoil, operating as a key operating base for ISIS and other militant terrorist groups. There were US-led airstrikes against ISIS camps in the area as recently as February, and upwards of 400,000 civilians have been displaced according to UN estimates.

As Obamacare first rolled out, the immediate failure of the expensive government website foreshadowed the disaster that the Affordable Care Act would continue to be.

Obama repeatedly promised cheaper premiums, lower co-pays and deductibles, and better coverage. It has all failed to materialize.

According to an NPR survey, only 4 percent of people say they have saved any money with Obamacare.

The Congressional Budget Office estimates that in the next decade, Obamacare will cost the federal government $1.34 trillion, with insurance premiums continuing to jump by about 6 percent a year.

Not only has the Affordable Care Act fallen short of Obama’s promises, it is a massive federal expensive that is turning out to be an incredible waste of taxpayer’s money.

When Obama decided to withdrawAmerican troops from Iraq in 2011, he allowed a previously stabilized region to fall to ISIS.

At the start of the Syrian civil war in 2011, the Islamic State group moved from Iraq to Syria to take advantage of the weak country in the midst of a civil war. Obama had the chance to defeat ISIS while they were still weak, but he failed to act.

His failure allowed the terror group to thrive and continue to push throughout the Middle East, as well as commit additional terror attacks in Paris and Brussels.

Obama’s 2009 $831 billion stimulus bill has fallen short of just about all it promised — except for the staggering cost.

As the New York Post puts it, here’s “the ugly truth” — in the past seven years of Obama’s presidency, the percentage of Americans below the poverty line has grown 3.5 percent. Median household income has dropped 2.3 percent. Labor force participation is down 4.3 percent. The amount of homeowners is down 5.2 percent. Food stamp participants are up a shocking 29.5 percent.

Obama and five other world powers agreed this year on the Iran Nuclear Deal, which officially lifted international oil and financial sanctions on Iran in exchange for Iran’s promise to limit its nuclear ambitions.

Obama praised the deal as “a success of diplomacy.”

He seems to be the only one who thinks so.

Since the deal, Iran has launched two ballistic missile tests violating the deal, one that contained the message, “Israel should be wiped off the Earth.”

As The Horn News reported, the European Union placed new sanctions on some Iranian leaders Monday because of human rights violations.

Did we miss any Obama blunders? Comment with your top five below!