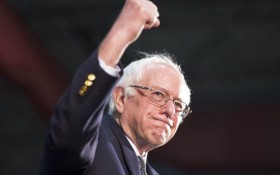 Is the Democratic primary about to turn into a full blown civil war? Vermont Sen. Bernie Sanders supporters have already been suspected as the agitators behind the recent violence at GOP frontrunner Donald Trump’s rallies.

A few minutes into Clinton’s recent rally Thursday on the campus of Purchase College, nearly two dozen Sanders’ supporters crashed the party and got in a shouting match with Hillary supporters, chanting, “If she wins, we lose!.”

Clinton responded sharply, and pro-Clinton supporters clashed back with an, “I’m with her!” chant.

The Sanders supporters eventually left without violence, but if their history is any indication this may just be the beginning.

The heated exchange came in the days before next Tuesday’s Wisconsin primary and ahead of next month’s New York primary, where Clinton is favored because of her deep ties to the state. The former New York senator holds a formidable lead among delegates but Sanders hopes a series of recent victories out West might turn into a springboard for a win in Wisconsin.

It also offered a vivid example of Clinton’s gulf with some young Democrats, who angrily support the Vermont senator’s upstart bid.

Clinton said young Sanders supporters “won’t listen to anybody else” and didn’t want to hear what others had to say.

Sanders campaign said he had raised more than $40 million in March and was aiming to surpass $43.5 million for the month, ensuring that he would not go away anytime soon.