Terror! 2 killed as man shoots into multiple restaurants in Toronto - The Horn News 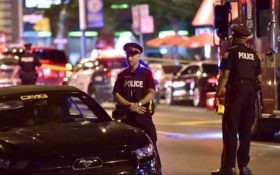 A man firing a handgun into restaurants and cafes as he walked along a Toronto street shot 14 people, killing two of them, before dying after an exchange of gunfire with police late Sunday, police said.

Police Chief Mark Saunders has he can not rule out radical Islamic terrorism as a motive in the shooting in the city’s Greektown neighborhood.

A spokeswoman for the province’s Special Investigations Unit, Monica Hudon, says three people are dead including the gunman in the Danforth Street attack. No further details were given on the second victim, but police did confirm one victim died Sunday night and a young girl was in critical condition.

A video from one witness shows a man dressed in black clothes and a black hat walking quickly and firing three shots from the sidewalk into at least one shop or restaurant. Toronto’s Greektown is a lively residential area with crowded Greek restaurants and cafes.

It was not immediately clear whether the man killed himself or died of injuries after being shot by police.

The condition of the other victims was not known yet, police spokesman Mark Pugash said.

Witnesses heard many shots and described the suspect walking past restaurants and cafes and patios on both sides of the street and firing into them.

John Tulloch said he and his brother had just gotten out of their car when he heard about 20 to 30 gunshots.

“We just ran. We saw people starting to run so we just ran,” he said.

An army of police, paramedics and other first responders soon descended on the scene, while area residents, some in their pajamas, emerged from their homes to see what was happening.

“It’s not gang related. It looks like someone who is very disturbed,” Fletcher said. Councillor Mary Fragedakis also said she heard the gunman was disturbed.

Fletcher said for this to happen in an area where families gather for dinner is a tragedy. Mass shootings are super rare in Canada’s largest city.

“We were so use to living in a city where these things didn’t happen,” Toronto Mayor John Tory said. “But there are things that happen nowadays and they are just unspeakable.”

This past weekend Toronto police deployed dozens of additional officers to deal with a recent spike in gun violence in the city. Tory said the city has a gun problem.

“Guns are too readily available to too many people,” Tory said.

The mass shooting comes a few months after a driver of a van plowed into pedestrians on a Toronto sidewalk, killing 10 people and injuring 14. Authorities have not disclosed a motive. But they have said the arrested driver, Alek Minassian, posted a message on social media referencing a misogynistic online community before the attack.