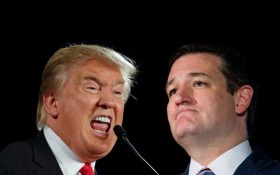 They’ve thrown everything they can at Donald Trump, and so far nothing has stuck. But could this be the rumor that finally derails the Trump train?

From wild accusations to bizarre claims, Teflon Don has withstood it all — but now the mainstream is pushing a new line of attack.

And this one has even those close to Trump chewing on their fingernails.

At issue is the GOP frontrunner’s relationship with Felix Sater, a mafia-linked con artist involved in assault and stock fraud. As an executive with a firm called Bayrock, Sater worked with Trump on a number of projects, including the Trump Soho in Manhattan.

But when asked about Sater, the man who has boasted of his memory has been unusually silent.

“Felix Sater, boy, I have to even think about it,” Trump told the Associated Press in December. “I’m not that familiar with him.”

Naturally, Trump’s enemies — from the dirt-digging media to the backstabbing party leaders to his front-stabbing rivals — have all seized on the connection.

“He’s clearly hiding something,” Ted Cruz said on “This Week With George Stephanopoulos.”

Cruz has also speculated that Trump won’t release his tax returns because it could expose his alleged ties to organized crime.

Cruz even implied that Trump had dealings with a mob-linked concrete company.

So what’s the real story?

Little is known about the history of Sater because much of it has been sealed by court order, but in addition to his crimes Sater has also been an asset — serving for years as a government informant and helping to put crooks behind bars in exchange for avoiding jail himself.

The attorney general’s office told ABC News that Sater’s cooperation was “crucial to national security and the conviction of over 20 individuals, including those responsible for committing massive financial fraud and members of La Cosa Nostra.”

As a result, Team Trump says a six-month arrangement in 2010 in which Sater served as a consultant scouting for high-end real estate deals shouldn’t raise too many eyebrows.

“If Mr. Sater was good enough for the government to work with, I see no reason why he wasn’t good enough for Mr. Trump,” Trump lawyer Alan Garten told the Associated Press.

He said Sater was “trying to restart his life” and “was regretful of things that happened in the past.”

Critics may claim it’s proof Trump has brought shady figures into his inner circle, but that’s ignoring the fact that it would be virtually impossible to make it as a developer in rough-and-tumble New York City without knowing a few rough-and-tumble characters.

Trump supporters could argue that since there’s no evidence the candidate himself has been involved in any shady business, this might even be a positive – proof he can handle all the dirty creeps who try to cozy up to you when you have some power without getting dirty himself.

Expect to hear more about this.

The left-wing media has been filing court orders to try to unseal documents related to Sater. If these sensationalists get their way, every minor revelation will no doubt be treated as a major bombshell.