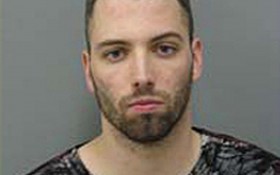 The United States military is made up of the finest warriors the world has ever seen.

But for years, the military’s handling of sexual assault allegations has come under heavy scrutiny. And the story that emerged Sunday regarding accused serial rapist and alleged sexual predator Army Pvt. Jameson T. Hazelbower may be the most outrageous mishandling of justice yet.

According to reports, Hazelbower went AWOL after learning he was suspected of raping a 15-year-old girl. Despite the potential threat to the public that he posed, the self-described sex addict roamed free for nearly three months before local police collared him in Winnebago, Illinois, near where he grew up.

And that was only by chance, according to interviews, police reports and court-martial records.

A police officer responded to a call late on a Friday night in March 2014 about a suspicious vehicle parked in a cul-de-sac outside an apartment complex. Hazelbower, was in the car with a girl, barely 14, in a state of undress. She was unharmed.

Hazelbower’s case is a window into an obscure but significant aspect of the U.S. military’s legal system. Deserters suspected of serious crimes are to be prioritized for capture based on the severity of the offenses. But the Army never searched for Hazelbower and the U.S. Marshals Service was not called in, even though marshals have arrested more than 200 deserters over the past five years alone.

In fact, there was a lack of urgency to locate Hazelbower despite strident warnings from his superiors at Fort Campbell, Kentucky, the records show. The military’s version of an arrest warrant described him as a “sexually violent predator” and a known drug abuser. Also, he had gone AWOL before. “CAUTION – ESCAPE RISK” is stamped in bold letters on the right side of the document.

The Army declined to discuss Hazelbower’s court-martial and why service officials chose not to pursue him. Army spokeswoman Tatjana Christian said the service typically does not conduct searches or pursuits to physically apprehend deserters “due to jurisdictional issues unique to each military installation.” She declined to say what those issues are.

Had anyone looked, Hazelbower may not have been hard to find. After fleeing Fort Campbell, he had gone home to Lanark, Illinois, a small town two hours west of Chicago. Lanark Police Chief Matt Magill and other local law enforcement officials said they were never asked to search for him.

Hazelbower ran into legal trouble while he was still in high school after the parents of a girl he had been dating accused him of stalking her. In July 2009, they secured an emergency order of protection to keep Hazelbower away from their daughter, according to records filed in the Carroll County, Illinois, circuit court.

Hazelbower, 17 at the time, and the girl attended the same high school. After she broke off the relationship, he would park his car outside their house late at night, the family alleged in the petition. He would gun the engine, squeal the tires and shine the headlights in the windows of their home.

“I feared for her safety,” said Branty Harris, the girl’s father.

A county judge dismissed the order in October 2009.

Hazelbower enlisted in the Army two years later and was assigned to the 101st Airborne Division at Fort Campbell, a sprawling installation in southern Kentucky near the Tennessee border. He was listed as AWOL on Jan. 10, 2014, a few weeks after Army Criminal Investigation Command agents informed him he was suspected of forcible sodomy and sexual assault.

The victim, 15 and from Kentucky, testified at Hazelbower’s court-martial that she met him on a social networking site. He went by the name Jason Bower and his profile listed him as 16 years old. She said he drove to a remote area on Fort Campbell where he assaulted her. Frightened and unsure of where she was, the victim testified that she stopped resisting because the more she struggled the tighter he gripped her.

In late February 2014, after the Army classified Hazelbower as a deserter, the service was informed of a second alleged victim. The sheriff’s office in neighboring Montgomery County, Tennessee, had established probable cause to believe that he had raped a 14-year-old girl several months earlier, Army Criminal Investigation Command records show.

She also had met Hazelbower online. Military prosecutors said Hazelbower had sent her messages over Skype telling her that he enjoyed raping her, according to court-martial records.

But it would be several more weeks before Hazelbower was caught in Illinois. Just after 10:30 p.m. on March 29, 2014, Winnebago police responded to the suspicious vehicle call. An officer ran Hazelbower’s name through a law enforcement database and found he had an outstanding warrant for military desertion.

The girl in the car with Hazelbower told police she had been communicating with him through a social networking service and this was the first time they had met in person. In her statement, she said Hazelbower grabbed her hand and placed it on his exposed penis. When she attempted to pull away, he held her wrist tighter.

Once in custody, Hazelbower gave Winnebago police permission to search his cellphone and they discovered text messages showing he was pursuing still another teenage girl in Illinois. He showed up at her aunt’s home, where she was staying. On the porch, he kissed her and touched her bottom. Hazelbower wanted her to get in his car. She refused and he eventually left.

For the two incidents in Illinois, Hazelbower pleaded guilty in the civilian court system to aggravated criminal sexual abuse and indecent solicitation of a child and received 30 months of probation.

Hazelbower was then returned to the Army. By that time a third sexual assault victim from the Fort Campbell area had been identified, although the court-martial records don’t state when the authorities first learned of her. She was 15 and lived in Kentucky, according to the documents.

He pleaded not guilty in military court to all the charges. But he was convicted by a military judge in May 2015 of child rape, possession of child pornography, sexual abuse of a child, desertion and other charges. For those crimes, he was sentenced to 50 years in prison.

Hazelbower’s family and friends wrote Maj. Gen. Gary Volesky, the commanding general at Fort Campbell, and urged him to reduce the sentence to no more than 20 years.

Volesky upheld the sentence handed down by the judge. But Hazelbower could do less time if he eventually is paroled. In the military justice system, he will be eligible for release from prison after serving one-third of his term.

In a long, handwritten note, Hazelbower also pleaded to Volesky for leniency and described himself as a victim. He said since enlisting in the Army, he had become a sex addict and an alcoholic and was suffering from depression. Yet the Army had ignored his problems, he said.

“I was literally laughed at,” Hazelbower told the general. “How could I be completely to blame?”