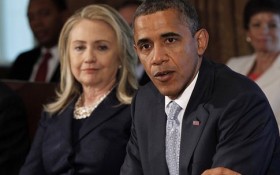 Some critics are claiming that the Obama administration couldn’t have just misplaced nearly 100,000 emails and documents from a Clinton aide they claimed they couldn’t find — until a lawsuit seemed to jog their memory.

And it looks like hiding emails and documents that should be public record has become a pattern for the Obama administration.

The website Gawker sued the State Department last year after it claimed it couldn’t find any emails that Philippe Reines, an aide to Clinton and former deputy assistant secretary of state, had sent to journalists. After the lawsuit, the agency said it suddenly discovered 90,000 documents about correspondence between Reines and reporters.

In one email, Reines wrote to a reporter, “I want to avoid FOIA,” referring to the common acronym for Freedom of Information Act requests.

In fact, when it comes to providing government records the public is asking to see in just about any case, the Obama administration set a historic record for “losing track” of them in 2015.

In the final figures released during Obama’s presidency, the U.S. government set a record last year for the number of times federal employees claimed to citizens, journalists and others that despite searching they couldn’t find a single page of files requested under the Freedom of Information Act.

In more than one in six cases, or 129,825 times, government searchers said they came up empty-handed, according to a new Associated Press analysis.

“It’s incredibly unfortunate when someone waits months, or perhaps years, to get a response to their request — only to be told that the agency can’t find anything,” said Adam Marshall, an attorney with the Washington-based Reporters Committee for Freedom of the Press.

When the government says it can’t find records, it rarely provides detailed descriptions about how it searched for them — or whether it really searched for them at all. Under the law, federal employees are required to make a reasonable search, but in many cases they seem to be making deliberate efforts to not find files.

“They do really crappy searches,” said Washington lawyer Kel McClanahan of National Security Counselors Inc., which handles transparency and national security cases. He lost a federal appeals case in November on behalf of a U.S. citizen, Sharif Mobley, trying to obtain U.S. records that might show why he has been imprisoned in Yemen since 2010. The court said the FBI wasn’t required to search for files in locations and ways Mobley’s lawyers wanted.

Under the records law, citizens and foreigners can — in theory — compel the U.S. government to turn over copies of federal records for zero or little cost. Anyone who seeks information through the law is generally supposed to get it unless disclosure would hurt national security, violate personal privacy or expose business secrets or confidential decision-making in certain areas.

Overall, the Obama administration censored materials it turned over or fully denied access to them in a record 596,095 cases, or 77 percent of all requests, including in cases linked to Clinton’s email scandal.