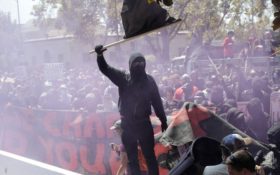 The Left has come up with a new plan to force our country into embracing its radical Woke ideology: re-write the English language.

In a marriage of extremism and political cynicism, Ivory Tower liberals want to literally eliminate the words you will need to speak, think, and act like a conservative — and the words you’ll need to complain about political leaders’ failure.

Stanford University announced a full 13 pages of “un-woke” words it wants to eradicate from our vocabulary, from popular use, and from the dictionary.

It all began last May 20, when the university began the Elimination of Harmful Language Initiative (EHLI).

“The Elimination of Harmful Language Initiative (EHLI) is a multi-phase, multi-year project to address harmful language,” its website explains. This massive new project is “geared toward helping individuals” recognize “and address” what it calls “potentially harmful language they may be usin,” especially “terms used in the United States.” This “list of everyday language and terminology” will focus on terms used “at the individual level.”

For instance, you have to stop using the words “beat a dead horse” and “kill two birds with one stone,” because they “normalize violence against animals.”

Forget saying someone decided to “abort” a program or a plan, because that term “can unintentionally raise religious/moral concerns over abortion.”

While EHLI plans for its guidelines to change the way individuals are able to speak, its left-wing intention to shape society couldn’t be clearer.

For example, look at the way the guidelines treat the radical gender ideology.

All year, the Woke Left told every American that they can’t “assume someone’s gender,” so they should ask people for their preferred pronouns. But now that’s offensive.

The EHLI says that we can no longer use the phrase “preferred pronouns,” because “the word ‘preferred; suggests that non-binary gender identity is a choice and a preference.” (No study has found transgender identity is a natural, inborn trait, although some experts have linked rapid onset transgenderism to peer pressure, especially among young girls.)

Speaking of “American,” that seems to be the term they want to destroy the most: EHLI says the word “American”  must be replaced with “U.S. citizen,” because “American” implies the U.S.A. “is the most important country in the Americas (which is actually made up of 42 countries),” stretching from the Canadian Yukon to the southern cape of Chile.

That sounds like a sensitive approach, if not for two facts. First of all, “The United States of America is the only country in either North or South America that uses the word America in its official title. We are, therefore, Americans,” as one person pointed out on Twitter.

Second, the United States is the most important country — not just in North and South America, but in the whole world. As much as the Left wants us to think of this as just another country, we’re still the global leader, the Shining City on a Hill, and “American” is still the most precious title any individual in the world can ever have.

Besides, how long until “U.S. citizen” gets canceled, because it discriminates against illegal aliens… or is that “persons who have immigrated,” as the EHLI demands we call them?

The guidelines claim to eliminate bias, but really they just enforce far-Left orthodoxy.

For instance, people of a certain age may remember being told to stop using the term “black” and begin using “African-American.” Now, EHLI says “African-American” has to go, because “Black people who were born in the United States can interpret hyphenating their identity as ‘othering.’” Instead, the right term is “Black” — and “when used to refer to a person, the ‘b’ (in Black) should always be capitalized.”

EHLI is not really against using race-specific language for every group, either: Stanford recommends replacing the term “Karen” with “demanding or entitled White person.” Naturally, there’s no word on the list to single out a demanding member of any other race or ethnic group.

On and on this goes, for more than a dozen pages of words, phrases, and thoughts you’re not supposed to have. The link is now behind a login page, but you can still read the full document thanks to the Wall Street Journal.

The whole undertaking echoes George Orwell’s 1984, where Winston Smith and his fellow subjects use Newspeak, the politically correct language designed to keep them enslaved. “Don’t you see that the whole aim of Newspeak is to narrow the range of thought?” one of the Party leaders says in the book. “In the end we shall make thoughtcrime literally impossible, because there will be no words in which to express it.”

It’s not just that they plan to eliminate your ability to think conservative thoughts; they want to take away the phrases you need to complain about politicians, and especially certain political leaders.

One of the words they want you to stop using is “Pocahontas,” which should be replaced with “the person’s name,” according to EHLI. “This is a slur and should not be used to address an Indigenous woman unless that is her actual name.”

So much for nickname conservatives use for Senator Elizabeth Warren, D-Mass., for misusing her minuscule amount of tribal blood to advance her career. (“Tribal” is also out.)

You can’t call a criminal a “thug,” because that word “0ften takes on a racist connotation when used in certain circles.” If you’re a Republican, you’re in those circles.

If the criminal happens to go to jail, you can’t call them a “convict” or “prisoner,” because this reduces them to just one aspect of their lives. The same is true with “immigrant” and “addict.”

They want you to stop saying “stupid” and “prostitute,” because it’s cruel to politicians. Just kidding; they said “stupid” was used to insult people who can’t speak and prostitute “unnecessarily correlates corrupt or unworthy purposes with sex work.”

So, when Elizabeth Warren’s policies flood your streets with illegal immigrants, freed convicts and prisoners, and let the open border turns kids into drug addicts that prostitute themselves to get enough money for their next fix, you can’t even call her a Pocahontas or a Karen.

Who do you think you are, an American?