13 detained in Turkey for suspected ISIS ties - The Horn News 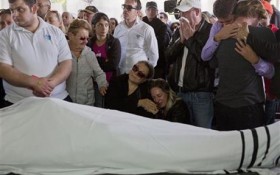 Anadolu Agency says security operations targeted three different Istanbul addresses based on information gathered by the Turkish anti-terrorism agency and German intelligence services. A Turkish national, an Iraqi and a Syrian were detained.

In the southern province of Gaziantep, 10 men were detained after being caught trying to enter the country illegally from Syria. One was wearing a suicide vest.

The arrests come after a suicide bomber in Istanbul killed two American-Israelis, another Israeli and an Iranian. Authorities blamed IS for Saturday’s bombing, which ripped through an iconic pedestrian street. It was the second attack this year that killed tourists in Istanbul.

Turkey is facing an array of security threats including spillover from the conflict in neighbouring Syria and renewed violence between the state and Kurdish militants in the southeast. An offshoot of the banned Kurdistan Worker’s Party, or PKK, has also staged deadly suicide bombings in the country.

Turkish President Recep Tayyip Erdogan on Tuesday issued a statement in support of Belgium, where at least 31 people were killed in attacks targeting Brussels airport and the city’s subway system.

“Turkey stands by Belgium in these hard times,” he said. “Our people, who are exposed to terrible attacks by different terrorist organizations, deeply feel the Belgian people’s pain and share it.”

In a separate incident, three members of Turkey’s security forces were killed in clashes with militants linked to the PKK in the southeastern province of Hakkari. A fragile peace process between the PKK and the Turkish state collapsed in July, reigniting a battle that has cost tens of thousands of lives.