Rubio: Trump is not a true conservative - The Horn News 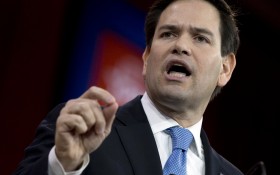 Florida Sen. Marco Rubio shared his opinion on why billionaire Donald Trump didn’t follow-through with his Saturday speech in front of the Conservative Action Political Conference (CPAC), the nation’s largest gathering of conservatives.

“Well, this is the American Conservative Union. It’s reserved for conservatives,” Rubio said to a standing-room only audience, who loudly cheered the response.

During his speech to the packed, energetic crowd Rubio noted that the next generation, “won’t have a chance if the conservative movement is hijacked by someone who isn’t a conservative,” in obvious reference to Trump.

After a disappointing showing on Super Tuesday, much of Rubio’s 2016 presidential hopes rest in his home turf of Florida, a winner-take-all state that votes March 15th.

“I have experience beating people who say they’re one thing, but are something else,” said Rubio, “And you’ll see that in March 15th.”

Post-speech, CNN political correspondent Dana Bash spent the first part of her question and answer session with Rubio circling back to Trump questions.

“I’m running for president to embrace the constitution and re-embrace free enterprise,” and Rubio went on to explain his most recent attacks on the GOP frontrunner.

“Donald Trump may have grown up the way he did with lots of money and boarding school. The way I grew up is that when someone is walking around punching people, someone is going to have to stand up and punch them back,” Rubio said.

Rubio, who won Minnesota on Super Tuesday, is betting his more aggressive approach to Trump will pay off and he’ll be able to gain enough momentum to consolidate the establishment vote behind his campaign.