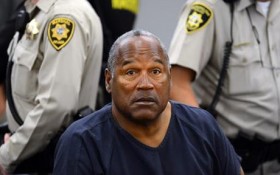 Detectives are investigating a knife purportedly found some time ago at the former home of O.J. Simpson, who was acquitted of murder charges in the 1994 stabbings of his ex-wife Nicole Brown Simpson and her friend Ron Goldman, a police spokesman said Friday.

The knife was supposedly found by a citizen, possibly during demolition of Simpson’s former home years ago, and turned over to a now-retired police motorcycle officer who was working as a filming location security guard, police Capt. Andy Neiman said.

The knife came to light in the last month, but Neiman did not say how that occurred, stressing that the authenticity of the story was not confirmed.

“Maybe the story is bogus from the get-go,” he said.

The account of the knife’s discovery was first reported by TMZ.

The weapon used in the killings has been a mystery for decades.

The killings occurred on June 12, 1994, and led to the “Trial of the Century” in which the former football star was acquitted in October 1995 by a jury that deliberated only four hours.

In 1997, a civil court jury found Simpson liable for the slayings and awarded millions of dollars in damages to families of the victims.

Simpson is imprisoned in Nevada for a 2008 armed robbery and kidnapping conviction.