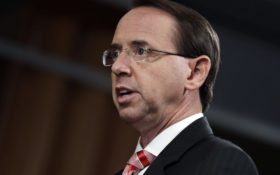 The Justice Department has announced charges against 12 Russian intelligence officers for hacking offenses during the 2016 presidential election.

The indictments were announced Friday by Deputy Attorney General Rod Rosenstein as part of the ongoing special counsel probe into potential coordination between the Trump campaign and Russia.

The Russians were accused of hacking into the computer networks of the Democratic National Committee and the presidential campaign of Hillary Clinton.

Before Friday, 20 people and three companies had been charged in the Mueller investigation.

That includes 13 Russians accused of participating in a hidden but powerful social media campaign to sway American public opinion in the 2016 election.