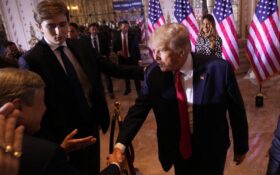 On Tuesday, former President Donald Trump announced his third campaign for president during a speech televised on cable news… and the data is now public.

During its 9 p.m. timeslot, Fox News Channel aired the first 40 minutes of Trump’s lengthy speech, and then it returned for the speech’s finale.

Fos News saw its audience balloon to almost 5.2 million total viewers during that timeslot, according to Nielsen data published by Mediaite. Plus, the cable network attracted 929,000 total viewers in advertisers’ favorite demographic: those between the ages of 25 and 54.

Usually, FNC averages 2.7 million total viewers in that timeslot, according to Adweek‘s review of the Nielsen data from the second quarter of this year.

CNN aired only the first 20 minutes of Trump’s speech before cutting away, and it saw some amount of success.

Instead of airing the speech, MSNBC aired its regularly scheduled programming. That night, MSNBC pulled only 1.8 million total viewers during that timeslot with Alex Wagner Tonight. In other words, the liberal network attracted an audience slightly more than one third the size of FNC’s.

Worse yet, MSNBC pulled only 217,000 demo viewers in that timeslot, less than a quarter of the number pulled by Fox News Channel.

Newsmax aired Trump’s announcement in its entirety, and the breakout network saw its audience double from the 8 p.m. timeslot to the 9 p.m. timeslot.

Including publically available viewer data, as many as 12.5 million people may have watched Trump’s speech on the internet and television.

Trump has gone viral for his campaign announcements in the past. In a video from 2015, he descended a golden escalator to announce his first campaign for president. In 2017, he attracted outsize attention for beginning his re-election campaign less than a year into his presidency.

He seems to have gone viral again on Tuesday.