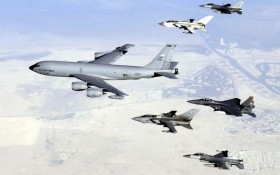 They joined ISIS as jihadist terror recruits, training for bloody war against the United States, and thought they were safe in a training camp far away from the bloody battle for Iraq and Syria.

Conducting multiple strikes in the country, American warplanes struck the heart of a major ISIS training camp in Libya near the Tunisian border Friday, and a Tunisian described as a key extremist operative probably was killed, the Pentagon announced. In Libya, local officials estimated that more than 40 were killed with more wounded, some critically.

In a written statement, Pentagon press secretary Peter Cook said the training camp was near the Libyan town of Sabratha and that the targeted extremist was Noureddine Chouchane, a Tunisian national whom Cook called “an ISIL senior facilitator in Libya associated with the training camp,” using an alternative acronym for ISIS.

Another U.S. official said up to 60 militants were present at the camp at the time of the strike by U.S. Air Force F-15E strike aircraft based in Europe.

Cook said Tunisian officials in May 2015 had named Chouchane as a suspect in a March 18, 2015 attack on the Bardo Museum in Tunis.

“He facilitated the movement of potential ISIL-affiliated foreign fighters from Tunisia to Libya and onward to other countries,” Cook said.

“Destruction of the camp and Chouchane’s removal will eliminate an experienced facilitator and is expected to have an immediate impact on ISIL’s ability to facilitate its activities in Libya, including recruiting new ISIL members, establishing bases in Libya, and potentially planning external attacks on U.S. interests in the region,” Cook added.

Another official, who spoke on condition of anonymity to describe details of the sensitive operation, said the U.S. believes that Chouchane was killed.

A witness in the city said he heard two explosions at 3:30 a.m. coming from the nearby village of Qasr Talel. He said the house that was targeted belongs to Abdel-Hakim al-Mashawat, known locally as an Islamic State militant, he said. He spoke on condition of anonymity because he feared for his safety.

The official Facebook page of the Sabratha local city council also put the death toll at more than 40 with more wounded, some critically. “There are torn body parts buried under the rubble,” it said in a posting.

Sabratha is one of the main launching points for smugglers’ boats heading to Europe. It has been also a transit point for Tunisians and North African jihadists before joining the Islamic State affiliates in their strongholds in central city of Sirte and the eastern cities such as Benghazi.

One U.S. official said Friday’s airstrike was taken “with the knowledge of Libyan authorities,” but the official would not be more specific about the coordination.

The U.S. military has been closely monitoring Islamic State movements in Libya, and small teams of U.S. military personnel have moved in and out of the country over a period of months. In November, a US military airstrike killed an Islamic State leader called Abu Nabil or Wissam al-Zubaydi, an Iraqi national in the eastern city of Darna. In July, airstrikes targeted an Al Qaeda gathering and officials said they targeted bel-Mokhtar but it was a failed operation in the eastern city of Ajdabiya.