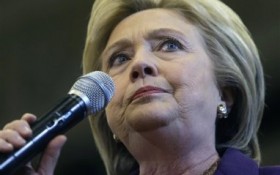 With just days to go before the Feb. 20th Democratic caucuses in Nevada, former Secretary of State Hillary Clinton’s campaign is in full panic mode.

According to the latest polls, Clinton’s lead — and the so-called Nevada firewall that was supposed to stop rival Vermont Sen. Bernie Sanders — is crumbling.

Pressure on the Clinton campaign has intensified following her 22-point loss to Sanders in last week’s New Hampshire primary.

Both Nevada and South Carolina are more racially diverse than leadoff Iowa and New Hampshire, and were initially assumed to be locks for Clinton. In fact, the polls in December had Clinton ahead by nearly 13 points in the Silver State.

But the most recent poll suggests the Nevada lead is quickly slipping away from Clinton, leaving her vulnerable to back-to-back primary loses. Sanders has gained steadily on her, and data says the upcoming caucus is now a dead heat between the two, according to a recent poll by TargetPoint.

Should that trend continue, it would mean disaster for Clinton’s White House aspirations. While she still maintains a commanding lead among so-called “super delegates” to the Democratic National Convention, losing her front-runner status could make these delegates and the Democratic establishment nervous.

Sanders message seems to be gaining traction in Nevada, which is still recovering from the Great Recession. The state experienced a massive real estate bust and years of double-digit unemployment, and its gambling and construction industries have not returned to the success of their boom-time years.

At a rally in Las Vegas, Sanders’ call for a new approach to the nation’s economy resonated with Nicole Reihl-Molloy, 37, of Las Vegas, who said that she and her husband struggled after the recession.

Reihl-Molloy said she had to take a retail job when she couldn’t find work in her field of marketing and her husband — a construction project manager — had to move away for several years to work.

“I used to cry myself to sleep,” she said. “There are a lot of people whose careers evaporated.”

Clinton, meanwhile, continues to cast herself as the rightful heir to President Barack Obama, and the right person to build on his work to resuscitate the economy after the 2008 crash.

But that message, according to the polls, is falling increasingly flat with voters.