Romney spending MILLIONS to take down Trump? - The Horn News 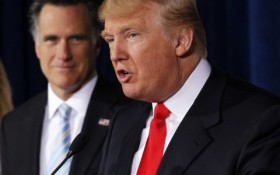 For months GOP frontrunner Donald Trump has largely shrugged off criticism from the mainstream Republican establishment.

But it’s the latest attack campaign from an unusual opponent — a super PAC with ties to former Republican presidential candidate Mitt Romney — that has Trump fired up.

The group  spent over $2.5 million in anti-Trump commercials, mailers, and fliers leading up to the Iowa caucus and claimed credit for Trump’s second-place finish there.

“Romney is doing a PAC, because Romney feels badly… because frankly that was an election that he should have won,” Trump said of the attacks on Wednesday on an appearance on Fox News.

The group has turned their sites on South Carolina’s Feb. 20th primary, announcing an all-out blitz of attack ads against Trump, according to The State.

“They should have devoted more time to Mitt Romney and helped him win instead of looking at, you know, taking other people down.” Trump said.

With polls suggesting Trump has a healthy lead in South Carolina, his opponents seem increasingly desperate to sap his momentum in the state and moving forward.