Ohio to yank funding from Planned Parenthood - The Horn News 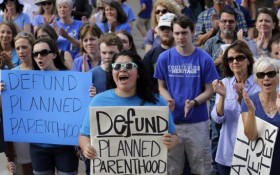 Pro-life supporters are applauding the recent move by Ohio legislators to pass a bill stripping Planned Parenthood of millions in government funding in the state, which Ohio Gov. John Kasich is expected to sign soon.

Across the country similar bills are pending in several states, and supporters hope their passage will save lives while simultaneously driving the abortion issue to the forefront of the 2016 presidential race.

The Ohio defunding bill cleared the state legislature and headed to Kasich on Wednesday, a day after the primary in New Hampshire. Kasich finished second in the New Hampshire race behind Donald Trump but ahead of a group of mainstream GOP candidates who vied for moderate support.

The House gave its final approval Wednesday on a mostly party-line vote, with the bill’s Democratic co-sponsor voting in favor and two Republicans voting against it.

The legislation would prohibit such funds from going to entities that perform or promote abortions, their affiliates and those that contract with an entity that performs abortions.

Kasich spent Wednesday campaigning in South Carolina, home of the South’s first primary on Feb. 20. He had events scheduled there for Thursday and Friday.

During a town hall meeting in New Hampshire this past weekend, a voter in Concord asked Kasich whether he’d support federal funding for Planned Parenthood if it were part of a balanced budget. “We’re not gonna fund it,” he said during the exchange.

Ohio’s legislation follows an outcry among abortion opponents around the country after the release of secretly recorded videos by activists alleging that Planned Parenthood sold fetal tissue to researchers for a profit in violation of federal law.

Stephanie Ranade Krider, executive director of Ohio Right to Life, called the passage a victory for the anti-abortion movement. “For a state like Ohio — it’s a purple state — to be able to pass something like defunding Planned Parenthood, I think that gives hope to other states.”

Planned Parenthood isn’t going down without a fight, however, and announced Wednesday it is targeting Kasich in online ads slated to appear on Facebook and news sites across Ohio.