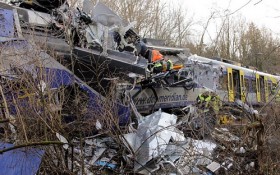 It was a horrific scene, and a tragedy that should have never happened. Two commuter trains crashed head-on Tuesday morning in a remote area in southern Germany, killing at least nine people and injuring some 150, some of whom had to be cut out of the wreckage and transported across a river for medical care, police said.

The two regional trains crashed before 7 a.m. on the single line that runs near Bad Aibling, in Bavaria, and that several wagons overturned, police spokesman Stefan Sonntag told The Associated Press. Fifty of those hurt have serious injuries, he added.

It took hours to reach some of the injured in the wreckage and authorities were still working at midday to remove the final body from the train.

“Once that is done then the investigators can begin their work,” federal police spokesman Rainer Scharf told the AP from the scene.

The rail line is commonly used by commuters heading to work in Munich, and would normally also carry children traveling to school, but they are currently on holiday, the dpa news agency reported.

It was not clear how fast the trains were traveling at the time of the crash but German rail operator Deutsche Bahn told dpa they were permitted to travel of speeds up to 120 kilometers per hour (80 mph) on that stretch of track.

The trains crashed in a remote area about 60 kilometers (40 miles) southeast of Munich in an area with a forest on one side and a river on the other. Rescue crews using helicopters and small boats shuttled injured passengers to the other side of the Mangfall river to waiting ambulances. Authorities said they were being taken to hospitals across southern Bavaria.

Hundreds of emergency personnel from Germany and neighboring Austria were on the scene looking through the wreckage and aiding in the evacuation of the injured.

“This is the biggest accident we have had in years in this region and we have many emergency doctors, ambulances and helicopters on the scene,” Sonntag said.

The two trains from the so-called Meridian line were both partially derailed and wedged against one another, train operater Bayerische Oberlandbahn said in a statement on its website.

It was not yet clear what caused the crash, police said.

Federal Transport Minister Alexander Dobrindt, speaking from the crash scene, said his thoughts were with the family members of the dead and the injured.

“We need to find out know what happened, if the cause of the crash was based on the technology or human failure,” he said.

Bayerische Oberlandbahn said it had started a hotline for family and friends to check on passengers.

“This is a huge shock. We are doing everything to help the passengers, relatives and employees,” Bernd Rosenbusch, the head of the Bayerische Oberlandbahn, told dpa.

In Munich, the city blood center put out an urgent call for donors in the wake of the crash.

The Munich Blood Donation Service, which delivers blood products to local hospitals, said on its website that there was “an acute increased need for life-saving blood products” after the accident and called for immediate donations.

Germany is known for the quality of its train service but the country has seen several other accidents, typically at road crossings.

Most recently, a train driver and one passenger were killed when a train hit the trailer of a tractor in western Germany in May, injuring another 20.

In 2011, 10 people were killed and 23 injured in a head-on collision of a passenger train and a cargo train on a single-line track close to Saxony-Anhalt’s state capital Magdeburg in eastern Germany.

Germany’s worst train accident happened in 1998, when a high-speed ICE train crashed in the northern German town of Eschede, killing 101 people and injuring more than 80. 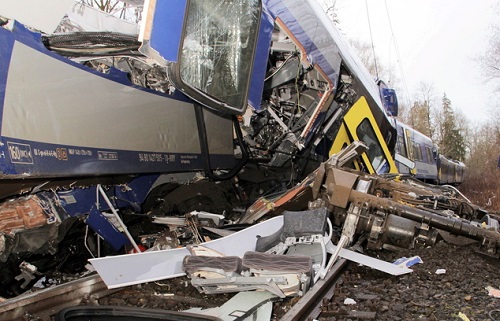 The axis sits separated from the carriage at the site of a train accident near Bad Aibling, Germany, Tuesday, Feb. 9, 2016. (Josef Reissner/dpa via AP) 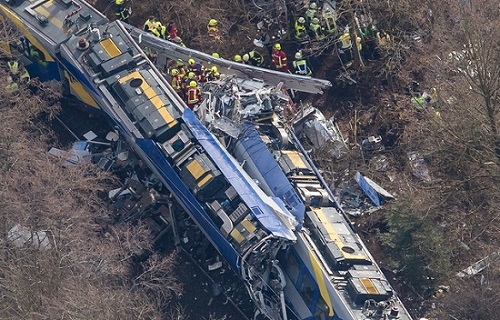 Aerial view of rescue forces working at the site of the train accident.(Peter Kneffel/dpa via AP)