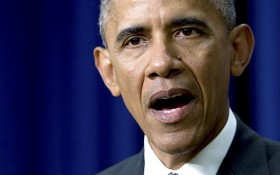 The Obama administration paid $1.7 billion to Iran in what some Republicans are calling a “ransom” for American hostages.

Now, Secretary of State John Kerry has until Feb. 17th to answer the charges to the House Foreign Affairs committee.

Republican lawmakers are trying to piece together the full scope of last month’s dramatic U.S.-Iranian prisoner swap and the lifting of many American sanctions on Tehran on Jan. 17th.

The$1.7 billion payment was made just after confirmation that three Americans left Iranian airspace, giving the appearance that it was ransom.

That’s led to calls for investigations and shed light on a little-known fund that the president can dip into when he wants to resolve international financial disputes.

On Wednesday, Rep. Ed Royce, R-Calif., the House Foreign Affairs Committee chairman, officially demanded answers in a letter to Kerry, complaining that his committee was not consulted about the payment.

“It is unclear how this $1.7 billion payment is in the national security interests of the United States,” Royce wrote.

The financial settlement between Washington and Tehran was largely lost amid U.S. elation over the release of the Americans and global interest in the latest benchmark in Iran’s nuclear transformation. With the United Nations’ confirmation that Iran satisfied the terms of last summer’s nuclear agreement, it immediately recouped tens of billions in frozen assets and earned the chance to gain significantly more from suspended oil, trade and financial sanctions.

The much smaller U.S.-Iranian agreement concerned more than $400 million in Iranian money, dating back to well before the U.S. nuclear sanctions. The money was tied to the 1979 Islamic Revolution decades ago, which the U.S.-backed shah’s government had used to buy American military equipment.

The Iranians got that money back last month — with some $1.3 billion in interest.

The administration said the settlement was decided on its merits. However, one Iranian military commander painted the payment in a different light. Mohammad Reza Naghdi, head of the Basij paramilitary wing of the powerful Revolutionary Guards, said the wiring of the funds was a payoff for letting five American hostages go.

In exchange for the Americans, the U.S. pardoned or dropped charges against seven Iranian citizens accused of sanctions violations, and gave up on extradition requests for 14 additional people.

Obama’s aides have insisted the billion-dollar deal was entirely separate, but administration officials acknowledged the claims and prisoner negotiations crossed over at times.

Although the matter surfaced in a number of exchanges over the years, talks on the money only gained speed during the last year or so of contacts between the Americans and Iranians focused on the prisoner swap, officials familiar with the process said. They weren’t authorized to speak publicly on the matter and demanded anonymity.

The GOP-led House Foreign Affairs Committee in January had asked congressional researchers to look into the matter. And Sen. Jerry Moran, R-Kan., introduced legislation in the Senate that would limit Obama’s ability to transfer funds to Iran, which could affect other, lingering financial disagreements between the two countries.

“The United States should not be funding governments that openly violate human rights, proudly disregard U.N. Security Council resolutions and call for the destruction of America and its allies,” Moran said in a statement.

“Rather than incentivize state-sponsored kidnapping,” he said, “the administration should remind the government of Iran that terror and hostage taking are not for-profit enterprises.”

Royce said earlier, “This concession was never raised by the State Department as on the table, which the administration must answer for.”

To make the payment, the administration returned the $400 million balance from the Iranian account once used for military purchases.

The rest of the money came from an account administered by the Treasury Department for settling litigation claims. The so-called Judgment Fund is taxpayer money Congress has permanently approved in the event it’s needed, allowing the president to bypass direct congressional approval to make a settlement. The U.S. previously paid out $278 million in Iran-related claims by using the fund in 1991.