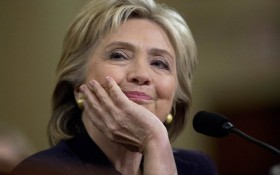 Polls showed for weeks that former Secretary of State Hillary Clinton and Vermont Sen. Bernie Sanders were locked in a tight horse race in Iowa.

But nobody expected last night’s Iowa caucuses to be decided by a flip of a coin — or, more precisely, six very suspicious coin flips.

The race between Clinton and Sanders was the closest in Iowa caucus history, the state Democratic Party said, despite the fact that Clinton had once enjoyed a double-digit lead in the state.

It was so close, in fact, that six delegates were assigned based on coin flips ordered by the state Democratic Party.

Monday in Ames, Davenport, Newton, West Branch, and two precincts in Des Moines, there were six delegates who were not assigned to either Clinton or Sanders under Iowa’s caucus voting rules. The problem, in at least two cases, was caused by caucus goers who mysteriously disappeared throughout the night.

Because the voting was so close between Clinton and Sanders, the state Democratic party ordered that the delegates would be assigned based on coin flips.

Clinton won all six flips — something that only has a 1.56 percent chance of happening — and got all the delegates.

And, unbelievably, that was enough for her to carry the state.

Clinton ended up earning four more delegates overall than Sanders in Iowa (699.57 delegates to 695.49), thanks in large part to some lucky coin flips.

It was a fortunate result for Clinton. And after spending millions trying to lock up Iowa, it looks like Clinton’s road to the nomination began with six quarters — or $1.50.