Satanists to take over Phoenix City Council? - The Horn News 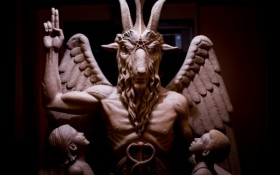 There’s outrage among citizens of Phoenix after it was announced that members of a satanic group will give the opening ‘prayer’ at an upcoming city council meeting.

Attorney Brad Holm says the government cannot exclude a religion – even satanists – from hosting religious ceremonies ahead of meetings.

It appears Mayor Greg Stanton agrees. His office released a statement that says, though Stanton disagrees with the religious message, “the Constitution demands equal treatment under the law” for satanists.

Councilman Jim Waring doesn’t see it that way. He told the Arizona Republic the city should have given a firm “no” to the group, which submitted their request in December to give the prayer, and should have been prepared to stand up to them in court.

“Frankly, I don’t know that we should be capitulating so readily to this,” Waring said.

Despite the objections of Waring and other council members, the satanists are scheduled to perform the public invocation on Feb. 17.

Satanic temple leader Stu de Haan confirmed the group’s plan, and said his group worships the biblical Satan as a metaphor for rebellion against tyranny.