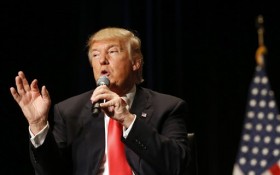 Donald Trump’s campaign filings show the Republican front-runner spent just $6.8 million in the final three months of last year. The outlay is less than half of what Ted Cruz, his nearest rival in the polls, spent during the same period.

Early in his campaign, Trump said he was willing to spend $100 million of his own money to win the Republican nomination. But propelled by his ability to generate controversy and free media, the businessman turned presidential candidate has not needed to. His first advertisements ran in early January, and he’s spent relatively little on campaign staff and consultants.

In total, Trump took in $13.5 million in campaign funds. Most of that money came in the form of a $10.8 million personal loan from the candidate, though Trump also collected more than $2.6 million from individual donors. Trump has said that he is not soliciting funds from campaign donors, though Newsmax Media, which runs a conservative news site, pitched itself as the Trump campaign’s exclusive online fundraising firm this summer.

The single largest vendor to the Trump campaign funding was himself. He spent $826,590 in payments his TAG Air, Inc, which owns a fleet of aircraft including his campaign jet. Additional outlays to Trump businesses include $$70,915 to Trump Tower Commercial LLC and $3,000 to Trump Restaurants LLC.

Trump’s campaign had nearly $7 million in the bank by the start of 2016.