California prison break an inside job - The Horn News 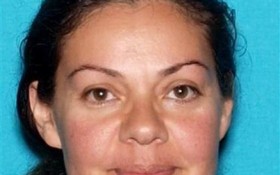 The alleged mastermind in the brazen escape of three inmates from a California jail recruited a jail insider to help in their plot, authorities allege.

The assistance, authorities say, came from an unlikely source — a woman whose English classes escapee Hussein Nayeri was taking while locked up.

Nayeri, 37, came to know Nooshafarin Ravaghi, 44, during an English as a second language course inside the Orange County jail. Beyond that, there was “some type of relationship that developed between the two,” sheriff’s spokesman Jeff Hallock said.

That relationship led to her helping him and the others to break out of the jail nearly a week ago, which led to her arrest on Thursday, Hallock said.

Nayeri’s past and sophistication among other factors led Sheriff Sandra Hutchens to tag him as probably the mastermind of last Friday’s elaborate escape. The prosecutor in the kidnapping and torture case against him was so alarmed by his escape she described him in an interview with a reporter as a Hannibal Lecter, the sadistic killer in “The Silence of the Lambs.”

Nayeri and two other inmates, 43-year-old Bac Duong and 20-year-old Jonathan Tieu, sawed through a metal grate over a plumbing tunnel and sliced through more metal and rebar to reach an unguarded section of roof, where they rappelled down with bed linens, authorities said.

Their need for strong tools to cut their way out had led to investigators believing they must have had help, the sheriff said. Ravaghi, the teacher, denied providing the men those tools, but officials say her assistance included providing them with Google maps to plot an escape route, and they’re investigating how deep her role went.

Duong stole a van the day after the escape after taking it for a test drive in the only reported sighting of the men since the breakout, and investigators believe the three men may be traveling while living out of the back of the white GMC Savana, Hallock said.

Nayeri’s attorney, Salvatore Ciulla, did not return a request for comment, and authorities did not know Thursday whether Ravaghi has yet obtained an attorney.

Nayeri moved to the U.S. with his family as a child. He attended high school in Fresno and then joined the Marines.

He had no felony record in 2005 when he was charged in a drunken-driving accident that killed his high school friend, Ehsan Tousi, and left Nayeri hospitalized with burns and struggling with depression, according to friends and family.

While free on bail, Nayeri fled but eventually was arrested in Washington and extradited to California in 2009. At his sentencing, friends and family wrote letters to the judge on his behalf, saying that the accident had turned him into a shell of his former self.

He hung a photo of Tousi on the wall of his hospital room and cried daily, one friend wrote. A sibling wrote that he stopped calling and spent hours at his friend’s gravesite.

“It was a horrible feeling to watch my little brother drift away, but there was nothing I could do,” Sheri Nayeri wrote the judge.

Nayeri told the judge he remembered the smell of burning flesh and was screaming his friend’s name before he blacked out.

He was sentenced to less than a year in county jail and four years of probation, in part because of his lack of felony history.

His criminal record subsequently grew, and he was on probation in 2012 when, prosecutors say, he fled during a traffic stop in Orange County and led police on a high-speed chase before getting away.

About a week later, prosecutors say, Nayeri and three others kidnapped a medical marijuana distributor, bound him with zip ties and drove him to desert where they believed he had buried a large sum of cash.

There, the man was tortured with a blow torch, according to court files.

As authorities closed in on Nayeri, he fled to Iran. He was arrested in 2013 in Prague as he tried to travel to Spain to meet his family.

He was to go on trial Feb. 23 on charges that include kidnapping, torture and burglary.

It was while awaiting the trial that he took the course with Ravaghi, who was working as a part-time English instructor through the Rancho Santiago Community College District.

She had worked in the inmate program since 2014 and had undergone a sheriff’s background check, the district said in a statement, adding that it was working closely with investigators to provide them all they needed.

According to a personal website that sells children’s books designed by Ravaghi under the name “the Noosha Collection,” she was born, like Nayeri, in Iran.

She traveled in Europe and Asia as a child and attended college in Tehran before coming to California in 1997, where she got a masters’ degree in education and began teaching English to non-native speakers. 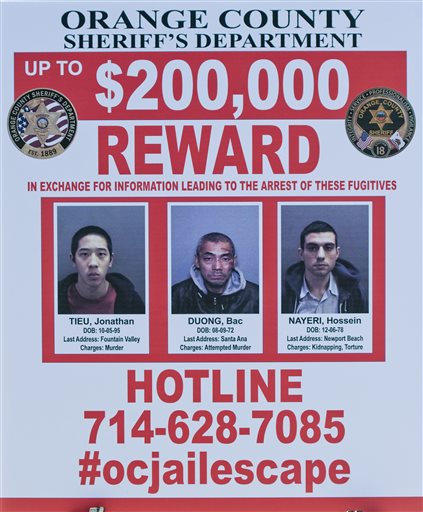 A wanted sign is displayed for the The reward for information leading to the arrest of the the three escaped inmates from the Orange County Central Men’s Jail on Tuesday, Jan. 26, 2016, in Santa Ana, Calif. (Paul Rodriguez/The Orange County Register via AP) MAGS OUT; LOS ANGELES TIMES OUT; MANDATORY CREDIT