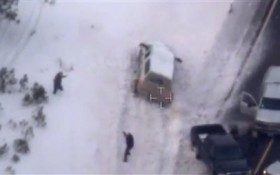 FBI authorities released a video last evening in an apparent effort to counter claims that the man killed in the confrontation Tuesday on a remote Oregon high-country road — Robert “LaVoy” Finicum — did nothing to provoke officers.

But even with this video, the issue remains muddier than ever.

On the one hand, the militia’s claim that they surrendered peacefully is clearly untrue, the video shows. Finicum’s truck nearly hit an FBI agent while it attempted to avoid a road block before it got stuck in the snow.

On the other, it remains debatable whether deadly force was necessary. The video leaves it unclear if police were trigger happy, or if Finicum was truly going for a gun when he reached inside his jacket.

The video appears to show Finicum’s arms outstretched. The FBI says his movements show he was reaching into his jacket before he fell dead into the snow, and claim Finicum had a loaded gun in his pocket.

During the confrontation in which Finicum was killed, the FBI and Oregon State Troopers arrested five main figures in the occupation, including the group’s leader, Ammon Bundy. Bundy and several of the other occupiers have another federal court hearing scheduled for Friday afternoon.

The FBI posted the video to its YouTube channel, which readers can see below. The Horn News editorial staff has fast-forwarded to the moments right before the deadly confrontation, and would like to warn readers that the footage may be upsetting.

The video, shot by the FBI from aircraft, shows Bundy’s vehicle stopped by police on a road. He and an occupier riding with him — Brian Cavalier — were arrested. A white truck driven by Finicum was stopped but took off, with officers in pursuit. The video shows Finicum’s vehicle plowing into a snowbank when encountering a roadblock.

A man identified as Finicum gets out of the truck. At first, he has his hands up, but then the FBI claims he attempts reach into his pocket and then falls into the snow.

“On at least two occasions, Finicum appears to reach his right hand toward a pocket on the left inside portion of his jacket,” said Greg Bretzing, special agent in charge for the FBI in Portland.

“He did have a loaded 9mm semi-automatic handgun in the pocket,” he said.

“Actions have consequences,” Bretzing continued. “The FBI and OSP tried to effect these arrests peacefully.”

With Finicum lying in the snow, the video shows what the FBI was the use of flash-bang grenades and tear gas on the vehicle’s remaining occupants. Later, agents arrest two other occupiers as they got out of the stuck truck: Ryan Bundy, who is Ammon’s brother, and Shawna Cox. Bretzing said another woman was in the truck but was not arrested, and would not identify her.

Bundy and his followers were on their way to a meeting in the community of John Day when then encountered the FBI-led operation to apprehend them. The FBI acted amid growing calls that something be done to end the occupation, including from Oregon’s governor.