Busted! Iran caught spying on US Navy - The Horn News 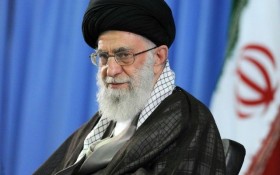 President Barack Obama promised his controversial nuclear deal with Iran would guarantee the world the best chance at peace.

Looks like no one informed the Iranian Republican Guard of that. In the latest in a series of embarrassing military flaps for the Obama administration, Iran admitted it recently flew a spy drone over a U.S. aircraft carrier and took “precise” photographs, Iranian state television reported Friday.

The reported drone overflight comes after a series of naval incidents between Iran and the U.S. in the greater Persian Gulf has heightens tensions in the region. The incidents include an allegedly illegal missile test by the Islamic Republic and its brief capture of American sailors who strayed into its territorial waters.

The report by state television said the drone flight occurred on the third day of the naval exercise, suggesting it happened Friday. Later, its website and the semi-official Fars news agency — which is close to Iran’s elite Revolutionary Guard — published footage it said was of the drone’s flight.

The footage showed the drone launch and later hover above what appeared to be an aircraft carrier underway in a body of water. The footage zoomed into a row of fighter jets on the carrier’s deck. There were no identifying marks visible on the carrier. The Horn News could not independently verify the video’s authenticity.

Cmdr. Kevin Stephens, a spokesman for the U.S. Navy’s 5th Fleet based in Bahrain, said an unarmed Iranian drone flew near the French aircraft carrier Charles de Gaulle and “directly over” the USS Harry S. Truman on Jan. 12 as the vessels were in international waters in the Persian Gulf.

Adm. Habibollah Sayyari, the commander of Iran’s navy, called the drone overflight and spy mission “a sign of bravery.”

It “allowed our men to go so close to the warship and shoot such a beautiful and accurate footage of the combat units of the foreign forces,” he told state television.

State television and the state-run IRNA news agency said an Iranian light submarine also participated in the surveillance operation. When asked about the submarine report, Stephens said “Iran has several submarines underway for its current exercise,” but declined to discuss specifics.

Separately, state television said Iran’s navy successfully fired surface-to-surface Noor cruise missiles during the drill at mock targets. Iran has announced other military exercises in the past to demonstrate the capabilities of its armed forces.

The U.S. has criticized many of the Iranian naval maneuvers, including what it called a “highly provocative” Iranian rocket test fire in December near its warships and commercial traffic passing through the Strait of Hormuz.

Earlier in January, Iranian forces captured and later released 10 U.S. Navy sailors who entered Iranian territorial waters near Farsi Island, an outpost in the middle of the Persian Gulf that has been used as a base for Revolutionary Guard speedboats since the 1980s.