Enough is enough! Sweden to deport migrants - The Horn News 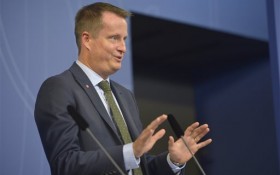 The brutal stabbing death of Swedish aide worker Alexandra Mezher, 22, at a shelter for teenage asylum-seekers has deepened worries in Sweden over its refugee situation.

Now, it looks like the Swedes are finally saying enough is enough.

And they may not be alone. All across Europe, frustration with the mismanagement of the escalating refugee crisis has caused political push-back.

Under mounting pressure to deal with brawls, sexual assaults and other problems at refugee shelters across the country, Sweden’s Interior Minister Anders Ygeman said on Wednesday that Sweden would deport up-to 80,000 asylum-seekers.

Ygeman told newspaper Dagens Industri that nearly half of asylum applications are currently rejected, and the country must get ready to send back tens of thousands.

His spokesman, Victor Harju, confirmed the quotes Thursday, adding: “That rate could of course change.”

In other parts of Europe, governments took actions to stem the refugee tide as well. Greece’s migration minister says his country is seeking European Union backing for the swift deportation of migrants not considered eligible for asylum from Greek islands back to Turkey.

Greek authorities also complained that neighboring Macedonia has stopped letting in refugees heading north to central Europe, leaving about 2,600 people stranded on the Greek side of the border.

Macedonian police had again stopped letting refugees through on Wednesday afternoon, but the reason was not clear and authorities were not available for comment.

After a five-month free-for-all that ended in November, Macedonia previously had started to only allow in migrants whom it deems to be bona fide war refugees — Syrian, Iraqi and Afghan nationals. All others are considered economic migrants and left trapped in Greece, where they are told to seek asylum, agree to voluntary repatriation or be deported.

In central Europe, the German Cabinet has approved measures meant to make it easier to deport foreign criminals — a package that ministers drew up amid outrage over New Year’s Eve assaults in Cologne.

And Dutch politician says his country, which currently holds the EU presidency, is working on a plan to ease the migrant crisis by which a core group of member states would accept up to some refugees coming from Turkey, in return for sending back many economic migrants that now arrive by the hundreds of thousands in Greece.

Diederik Samson — leader of the Socialist PvdA party, a key partner in the government — told De Volkskrant newpaper that a core group of nations should be willing to accept a set number of refugees coming from Turkey, if the other migrants can be sent back.