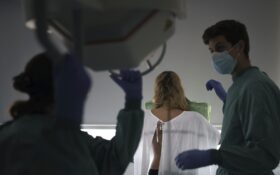 Health authorities in Spain are blaming human error for the switching of two baby girls in a maternity ward almost 20 years ago, after one of them discovered by chance through a DNA test as a teenager that she wasn’t the daughter of her presumed parents.

“It was a human error and we haven’t been able to find out who was to blame,” Sara Alba, health chief of Spain’s northern La Rioja region, told a news conference Tuesday.

“The systems back then were different and weren’t as computerized as they are now,” Alba said, offering assurances it couldn’t happen again.

The newborns were mixed up in 2002 after being born five hours apart at a hospital in La Rioja. They were both in incubators because they were born underweight.

The woman, now 19, who first discovered she had been given to the wrong parents is demanding compensation of 3 million euros ($3.5 million) from local health authorities.

Alba, the health chief, spoke after the local newspaper La Rioja published a report Tuesday about the switch.

The other woman who was handed to the wrong parents has been informed of the mistake, the newspaper said. Neither woman was identified.