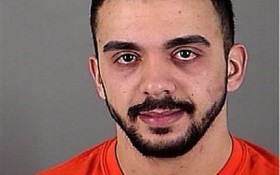 A would-be terrorist in Milwaukee planned to storm a Masonic temple and kill at least 30 people to show the world that “nobody can play with Muslims.”

Instead, he’s behind bars.

Federal prosecutors charged 23-year-old Samy Mohamed Hamzeh with unlawfully possessing a machine gun and receiving and possessing firearms not registered to him.

According to an FBI affidavit, agents were tipped off in September that Hamzeh planned to travel to Israel in October to attack Israeli soldiers and citizens in the West Bank. He abandoned those plans due to “family, financial and logistic reasons,” the affidavit said, but refocused his efforts on a domestic attack.

Hamzeh discussed his plans extensively with two FBI informants, who began recording his conversations with them in October.

Hamzeh and the two informants traveled to a gun range on Jan. 19 and practiced with a pistol. Afterward they took a tour of a Masonic temple in Milwaukee. The affidavit does not name the temple and a spokesman for the U.S. attorney, Dean Puschnig, declined to identify it.

Masons are members of a fraternal organization that carries out a variety of activities including charity work. Wisconsin has nearly 11,000 Masons in 180 lodges, according to Frank Struble, grand master of Free and Accepted Masons in Wisconsin. The organization is not a religion.

Struble said the allegations were “hard to hear.” He said he knew which Masonic center had been targeted but declined to identify it.

“Masons are a part of an organization that helped build this country,” Struble said. “I can understand from that standpoint where someone who is against this country would target us.”

The owner of a downtown Milwaukee gym said she recently fired Hamzeh after hiring him as a trainer just a few weeks ago.

Delia Luna of 9Round Kickbox Fitness described Hamzeh as “very intense, very militant” as a trainer and said he didn’t fit the atmosphere she wanted to create.

Federal agents said that on Jan. 19 and into the early morning of Jan. 20, Hamzeh discussed his plans to attack the temple with the informants, telling them they needed two more machine guns — the group apparently already had one — and silencers. They planned to station one person at the temple’s entrance while the other two went through the building, killing everyone they saw. They then planned to walk away from the scene as if nothing had happened.

“I am telling you, if this hit is executed, it will be known all over the world … all the Mujahedeen will be talking and they will be proud of us,” Hamzeh said, according to the affidavit. “Such operations will increase in America, when they hear about it. The people will be scared and the operations will increase. … This way we will be igniting it. I mean we are marching at the front of the war.”

Hamzeh added that he hoped to kill 30 people, “because these 30 will terrify the world. The (expletive) will know that nobody can play with Muslims.”

He added, “We are here defending Islam, young people together join to defend Islam, that’s it, that is what our intention is.”

According to the affidavit, Hamzeh met with two undercover FBI agents on Monday. They presented him with two automatic machine guns and a silencer. He paid for the weapons and silencer in cash and put them in the trunk of his car. The agents then arrested him and recovered the guns and silencer.