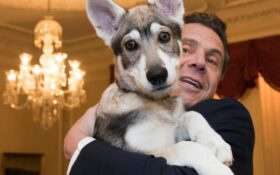 Disgraced New York Gov. Andrew Cuomo was accused of abandoning his dog, Captain, as he fled the New York governor’s mansion this weekend — and he’s asking his former staff to find a home for the dog he adopted just three years ago.

According to a report by the Times Union, the governor “had recently asked mansion staff members if anyone would be interested in caring for the dog. Captain — a high-strung mix of shepherd, Siberian and malamute — has nipped a few people since Cuomo adopted him in 2018, the sources said, and a mansion staffer recently took the dog home for a few days but decided he was too much.”

His office defended the decision to leave behind the family dog. A spokesman said Cuomo had “better things to do” and that the dog was left behind only temporarily because he’d planned a vacation.

“Captain is part of the governor’s family and for your nameless ill-informed source to imply they’ve been trying to give him away is untrue,” Cuomo spokesman Richard Azzopardi told the Times Union through a written statement Saturday. “Someone offered to watch him for a few days while the transition was ongoing but for that to be weaponized and morph from a game of telephone into the pages of your paper is absurd — now excuse us we’re preparing for a major storm.”

As he prepared to resign, Cuomo himself defended his record over a decade as New York’s governor and portrayed himself as the victim of a “media frenzy” as he prepared for a power transfer that will make Lt. Gov. Kathy Hochul the state’s first female governor.

Cuomo, a Democrat, was set to end his term at 11:59 p.m., just under two weeks after he announced he would resign rather than face a likely impeachment battle over sexual harassment allegations.

Hochul was scheduled to be sworn in just after midnight by the state’s chief judge, Janet DiFiore, in a brief, private ceremony.

In a pre-recorded farewell address released at noon, Cuomo boasted of making government effective in his years in office, cited his work battling the COVID-19 pandemic, and struck a defiant tone on the harassment allegations.

He said the report that triggered his resignation — a scathing account of what Attorney General Letitia James said was sexual harassment or inappropriate touching of 11 women — as “designed to be a political firecracker on an explosive topic, and it did work,” Cuomo said. “There was a political and media stampede.”

Some critics jumped on Cuomo’s last remarks as self-serving.

“100000000 opportunities to be a better leader. Chose himself every time. Goodbye, Governor Cuomo,” tweeted Assemblymember Yuh-Line Niou,” a fellow Democrat.

The switch in leadership was happening in the aftermath of Tropical Storm Henri, which narrowly missed Long Island on Sunday but dumped rain over parts of the Catskill Mountains and Hudson River Valley.

The storm drew Cuomo back out into public view over the weekend, albeit briefly. He gave two televised briefings — warning New Yorkers to take the storm seriously with the same mix of scolding and reassurance that once made his daily COVID-19 briefings popular with the mainstream media.

In a statement released to some news organizations, Cuomo’s top aide, Melissa DeRosa, said the governor was exploring his options for what to do after he leaves office but had “no interest in running for office again.”

An aide who said Cuomo groped her breast and has since filed a complaint with the Albany County Sheriff’s Office. Separately, Cuomo was facing a legislative investigation into whether he misled the public about COVID-19 deaths in nursing homes to protect his reputation as a pandemic leader and improperly got help from state employees in writing a pandemic book that may net him $5 million.